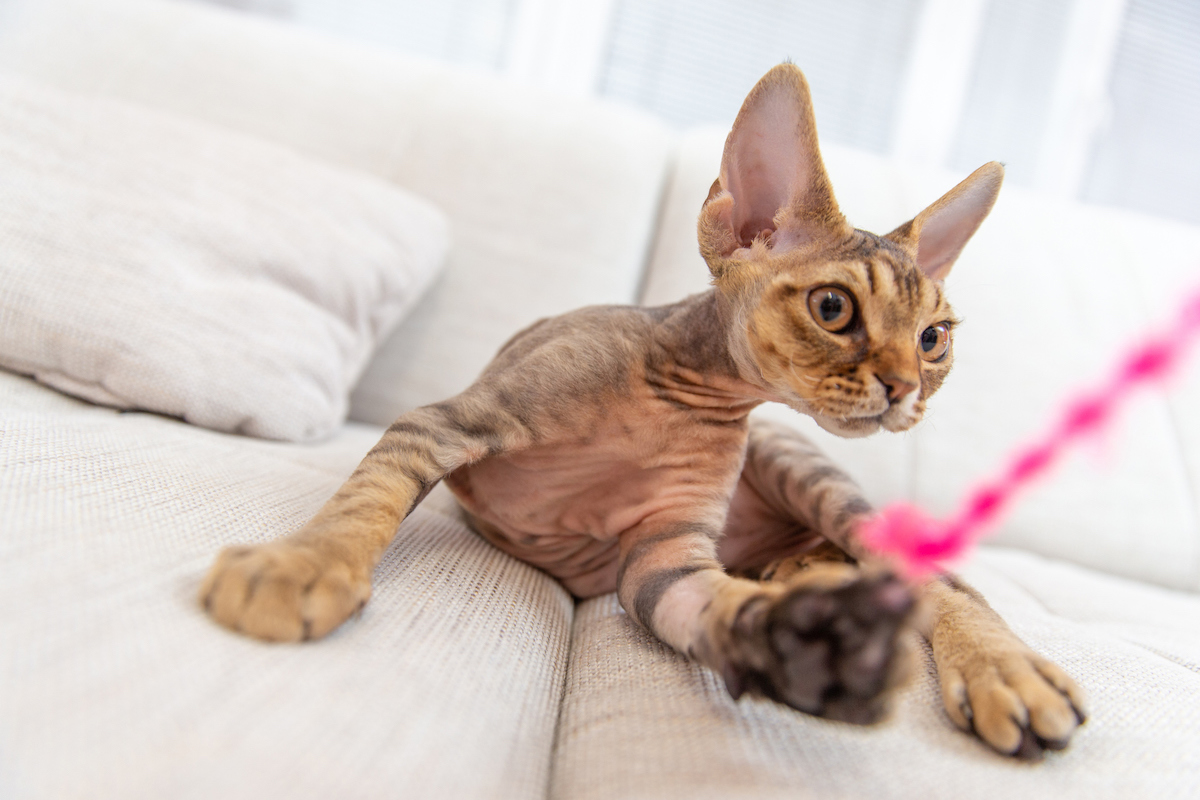 After reviewing the Potaroma Wall Cat Toy and the Potaroma Flopping Fish last fall, Peaty the Orange Tabby returned to TikTok to see what other toys had enamored the app’s cat lovers. That’s where he found the Moody Pet Fling-Ama-String, another popular toy promising hours of feline amusement.

Priced at around $30, the Fling-Ama-String is one of the more expensive cat toys on the market. Does it live up to expectations and to its high price point? Or is the cat toy more of a flop than a fling? Naturally, Peaty had to find out. 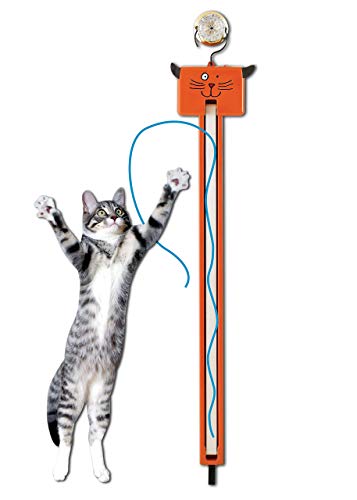 The Moody Pet Fling-Ama-String is a door-mounted cat toy with a small hidden motor inside. The motor powers an elastic belt that rotates inside a plastic channel stretching a little over two feet long. One end of a rainbow-colored string is attached to the belt. The string is pulled along with the belt, causing the loose end to “fling” about. It also disappears into the back of the toy and reappears at the top, captivating cats in an unending game of hide-and-seek.

The Fling-Ama-String boasts several awards, including the Editor’s Choice from Cat Fancy Magazine and the Best New Cat Product from the Global Pet Expo. In addition, it has more than 3,000 five-star reviews on Amazon, with an overall rating of 4.1 out of 5 stars.

First Impressions of the Fling-Ama-String

The Fling-Ama-String arrived for testing in a fun yellow box covered with cheeky illustrations, adorable “reviews” from other cats, and helpful instructions.

It’s made of bright orange plastic, with a funny cat-face painted on the top section, where the motor is housed. Two black ears shaped from soft foam stick out of the sides. They look a bit more like horns than cat ears, but the toy wins on style points nonetheless—it’s bright, fun, and charming. Plus, despite being made almost entirely of plastic, it feels sturdy.

Setting up the Fling-Ama-String does require some effort. But the process is straightforward and the instructions are clear. Three AA batteries are needed to power the toy (these do not come included). Many reviewers recommend using rechargeable batteries, noting that the toy goes through them quickly.

The toy mounts to a door with a metal hook that hangs on the doorknob. The hook fits a variety of handle styles, including both knobs and levers, and an elastic strap anchors the fling-string cat toy in place, preventing the whole mechanism from flying about. Some movement is inevitable, so soft pads on the back of the plastic help to avoid any damage. 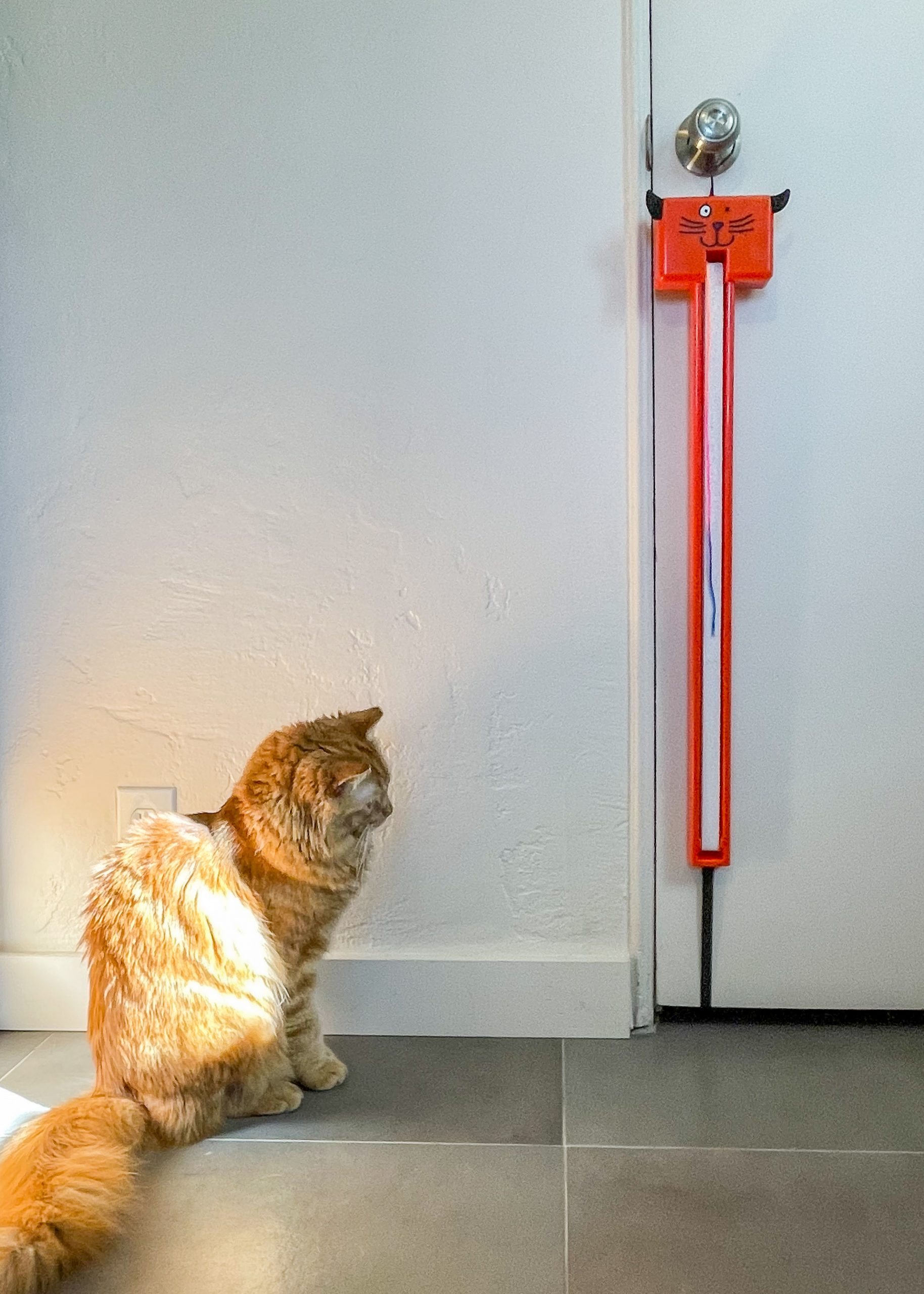 Peaty’s curiosity was piqued as soon as I pulled the Fling-Ama-String from the box. While the manufacturer clearly states that the anchoring black elastic is not a toy, he was unsurprisingly intrigued by the loose strap.

After digging around in a drawer for batteries, I hung the toy on a door in the hallway and turned it on.

The Moody Pet Fling-Ama-String moves at two speeds. I initially and unintentionally selected “fast,” then moved it back to the slightly more moderate speed.

The box indicates that some cats might be afraid of the toy at first, but that wasn’t the case for Peaty. He camped out in the hallway, watching the string flow in and out of the mechanism, assessing the situation, and pretending not to be entranced by it. 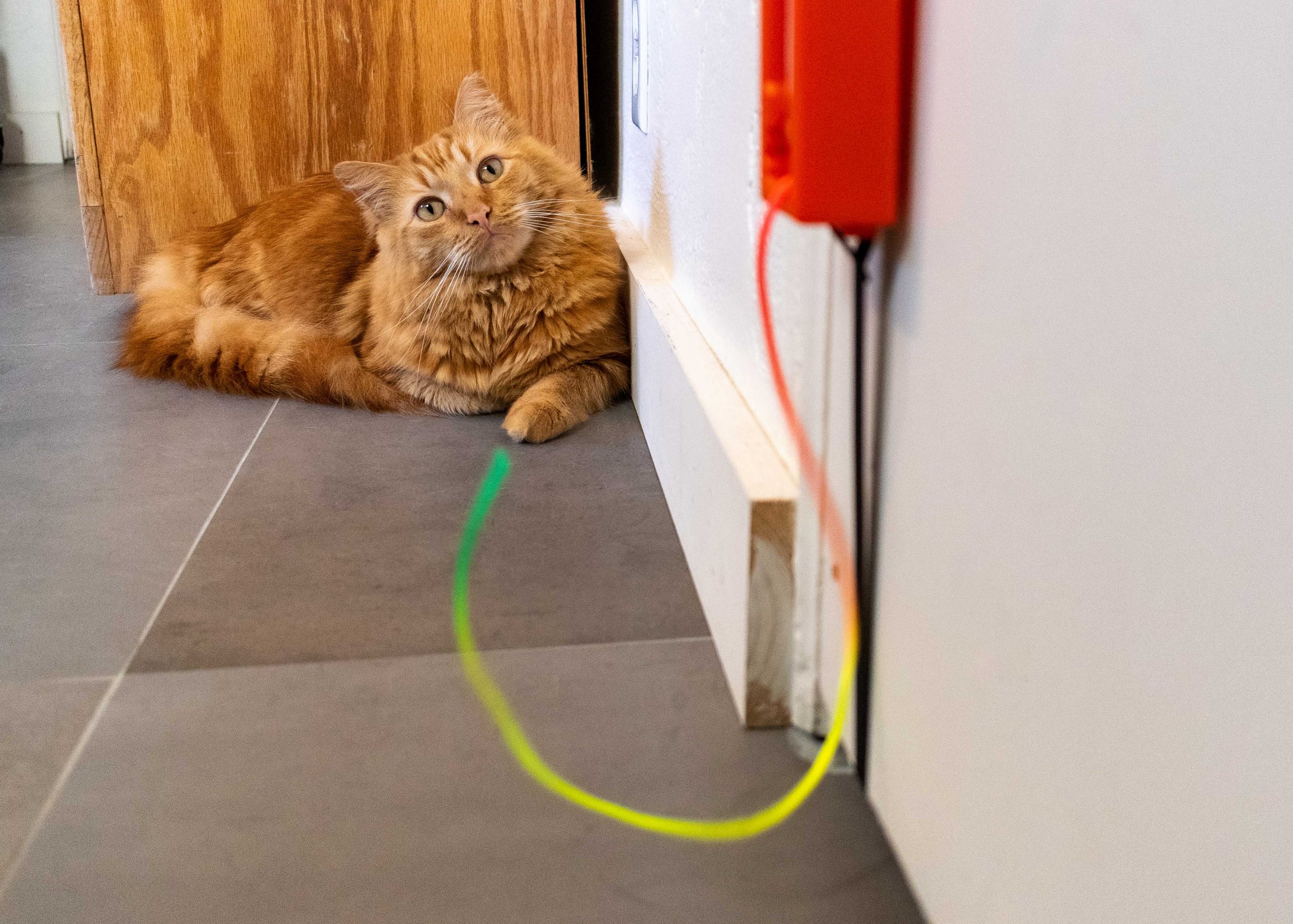 Peaty watching the Moody Pet Fling-Ama-String and anticipating his move.

Finally, he pounced. After a few failed attempts to catch the flinging string, he got ahold of it and held it tight. The motor, which had been surprisingly quiet, now squealed in response. The noise surprised Peaty, and he ran away, but only for a moment. As soon as Peaty released the string, it resumed its rotation and the cat resumed his position in the hallway. He continued watching the rainbow cord flip around until his next brave attempt to catch it.

Many reviewers indicated that the Fling-Ama-String captures their cats’ attention for hours, but not Peaty. After a few successful attempts to catch the string, he appeared satisfied, moving on to other adventures around the house. In all fairness to the Fling-Ama-String, that response wasn’t entirely surprising. Peaty has one other battery-operated toy, which more often induces sleep than pouncing.

Even if the toy doesn’t enrapture Peaty for hours, it does keep him entertained for quite a while. And, unlike many of his toys, it does so with little effort on the part of his humans, an essential feature in the work-from-home era.

Conclusion: Should You Get the Fling-Ama-String for Your Cat?

Based on thousands of five-star reviews alone, yes! The Moody Pet Fling-Ama-String is a fun and captivating option to keep active pets of all ages amused. As a bonus, reviewers praised Moody Pet’s customer service. The company was said to address issues and even replace parts for the toy when things went wrong.

Some reviewers expressed concern that their cats could detach—and then consume—all or part of the string. But with proper supervision, the Moody Pet Fling-Ama-String promises many hours of fun for cats and their owners.

The CAT That WROTE a PHYSICS PAPER 📝🐱 (F. D. C. Willard aka Chester)
DOG CARE #pet @petandpuppy
Vitamins for Senior Dogs
Watch What I Train My Dog On a Daily Basis! Why Isn’t She Trained Yet?
First-aid Advice for Your Pets