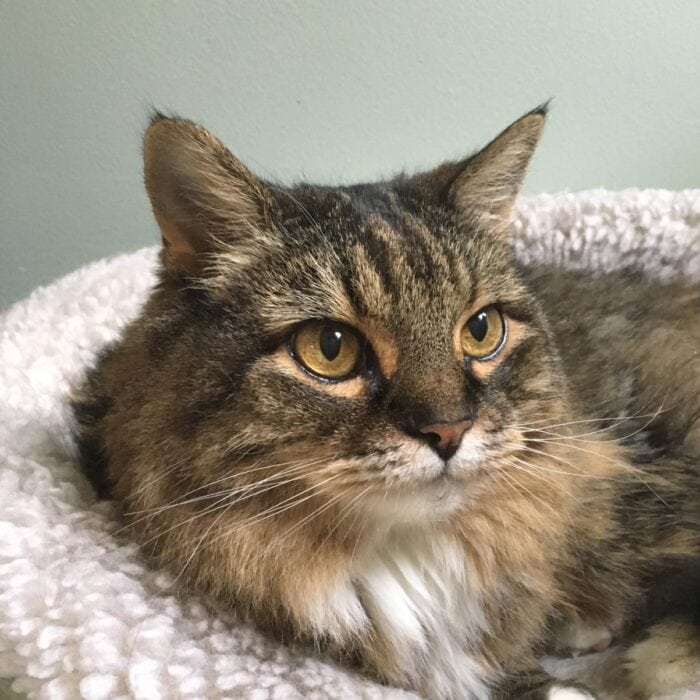 It’s always sad when a friend’s cat dies. My heart hurts for what I know they’re about to go through as they mourn their loss. We’ve all been there, and even though everyone grieves in their own unique way, we all know how hard it is. On Monday, my dear friends Rita and Rob had to say good bye to 21-year-old Kitty Girl.

They rescued Kitty Girl when they found her in a parking garage 21 years ago. She had recently given birth. After an unsuccessful search for kittens, they took the small, grimy cat to a nearby vet, who told them she was probably six months to a year old.

Rita and Rob weren’t looking for a pet at the time. They had talked about getting a dog at some point. “It wasn’t that we didn’t like cats,” said Rita, “but neither of us were very experienced with them. We considered finding her a good home with some bona fide ‘cat people’, calling her Kitty Girl so as to not give her a real name and risk getting too attached.” 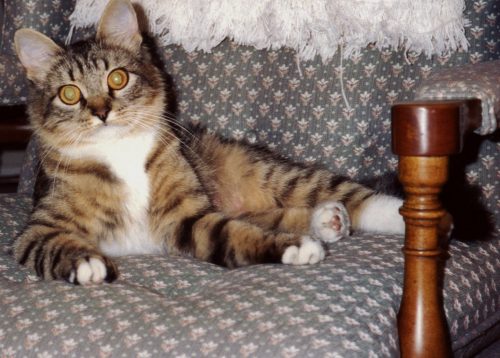 After two days in their home, the die was cast. Kitty Girl fell in love with Rob. The name stuck, and so did she. For the next 20 years, he was her one and only love.

Kitty Girl was not an easy cat to love. She began showing aggressive tendencies, culminating in a savage attack on Rita. “During the whole attack that night, Kitty Girl looked miserable,” remembers Rita. “She was panting between growls, and her body posture was completely defensive, as if she was the one under attack. It was heart wrenching to see this beautiful cat so out of control. Kitty Girl clearly needed help, and so did we.” 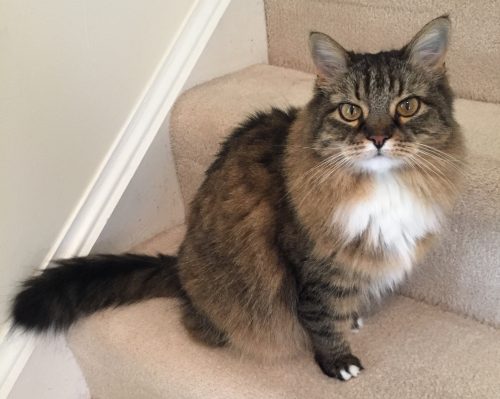 Rita and Rob never gave up on Kitty Girl. They consulted with a veterinary behaviorist. Over the years, and a lot of dedicated work on Rita and Rob’s part, Kitty Girl became less fearful and more relaxed, and her aggression levels decreased and were “mostly confined to using bad language and a swat or two,” as Rita put it.

Over the last few years, Kitty Girl developed multiple health problems, including hyperthyroidism and kidney disease. Up until very recently, she continued to do well and loved her life. She was especially happy that her papa was working remotely since the start of the pandemic. She often participated in work meetings and online classes. She always viewed Rita as more of a servant/nurse/waiter: Rita was the one who kept looking for foods that she would eat, prepared her “cocktail” of medications, and generally ensured that her physical needs were met, but as far as Kitty Girl was  concerned, the sun rose and set with her papa. 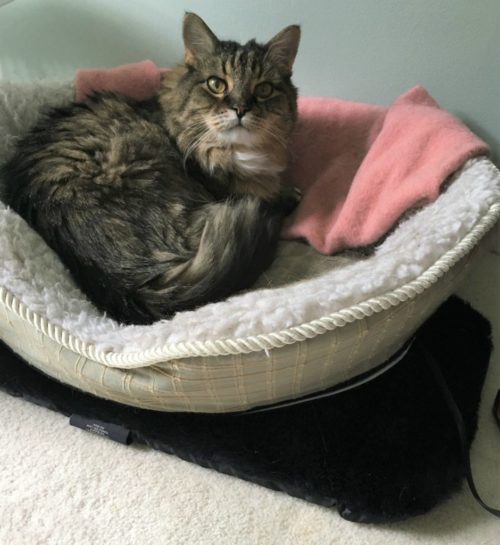 Kitty Girl was a challenging cat, but, as Rita so eloquently put it in a beautiful post she wrote for The Conscious Cat, sometimes “you get the cat you need, not the cat you want.”

Since Kitty Girl didn’t take kindly to visitors, I never met her, but I still feel like she was a part of my life over the last ten or so years that Rita, Rob and I have been friends. I will miss hearing stories about this sassy little lady.

3 Comments on A Tribute to Kitty Girl

Training our puppy to stay  #Dog training 
Let’s see who the smallest dogs are at dog daycare today! #dogshorts #doglover
The CAT That WROTE a PHYSICS PAPER 📝🐱 (F. D. C. Willard aka Chester)
The Mysterious History of the White House Cats: From Lincoln to Today!
10 COMMON DOG BEHAVIORS Explained 🐶❓