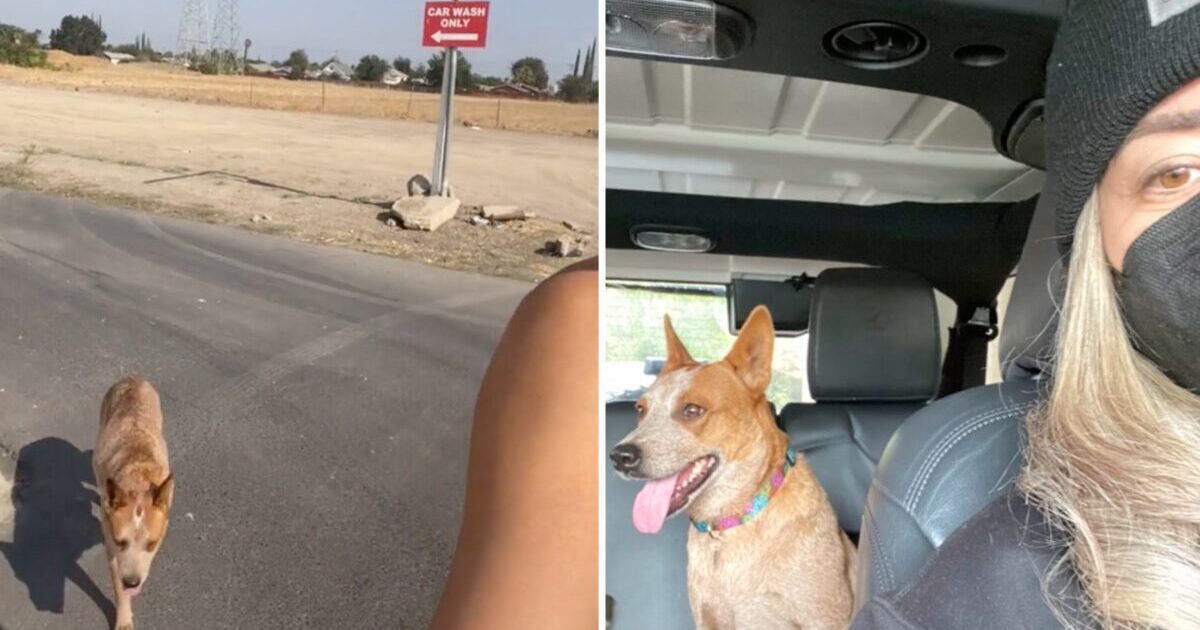 Some people see a struggling stray dog and don’t give it another thought. Leilani Wong and her husband are not those people. The couple was road-tripping when they stopped at a gas station in Stockton, North Central California.

While they were filling up, a stray dog approached their car. The Australian Cattle Dog was filthy, and her ribs were visible. Yet, after all the heartbreak she presumably experienced, she still had the desire to be with people. 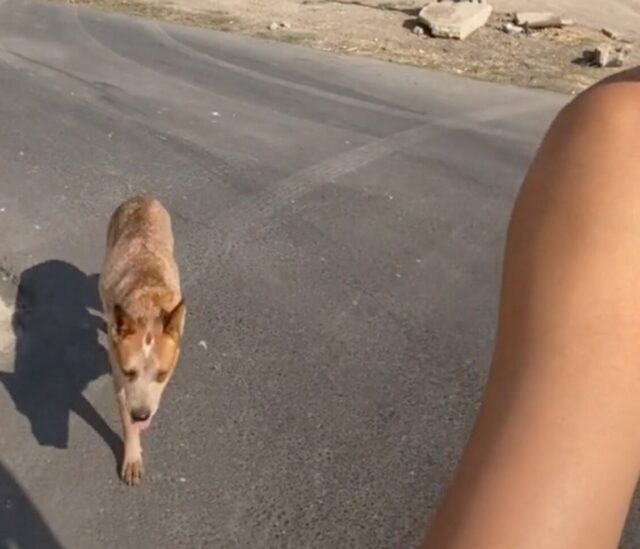 Wong described the moment she met this dog to The Dodo:

“I saw her walking around the gas station, and she stopped in front of our car and was just staring at me. And I’m hitting my hand on the window, trying to get my husband’s attention, like, ‘Are you seeing this?’ Then she started following my husband around the car.”

It was 105 degrees outside in Stockton, so Wong got the dog some water and food. When she asked at the gas station, she learned this place serves as a common dump site for unwanted animals.

Unable to leave this poor thing behind, Wong and her husband decided they would put her in the car with them and look for a shelter along the way that would take her in. In the meantime, they named her Kaia.

An Unknown Past And A Promising Future

When Kaia first joined their road trip, the dog seemed shy and afraid. She clearly experienced severe neglect before being abandoned.

“My husband slept in the car with her the first night, and she was just scared, nervous and timid. The only thing she would do was eat,” Wong said.

They also had Kaia scanned, and she had no microchip. There’s no telling where she came from and how she ended up at the gas station alone.

Back home in Washington, they took her to the vet for treatment. They planned to get her into good shape so they could find a new home for Kaia, but Wong and her husband just couldn’t let her go.

“After exhausting all options in California trying to find her family, driving to humane societies, vets, rescues, pounds, we decided to bring her home. We were very close to dropping her off at the pound, but after lots of tears and anguish we realized we couldn’t do it.”

When Kaia first came home, she resisted the comforts of being a pet. She only slept on hard surfaces for a while and didn’t play with toys. After some time, she started to feel more at home.

“Her personality at first was very timid, scared, unsure of herself and not confident. But her personality now is lovey, snuggly, cuddly, attached at your hip. You can’t even go into another room because she’s there with you.”

The couple already had three dogs, so they were worried about adding a fourth. Kaia fit seamlessly into her new pack. She also gets along with the family’s other animals: ducks and chickens.

Who could ever abandon this sweetheart?

Today, Kaia still lives with the couple she happened to encounter at a gas station in California. It seems she’s finally getting the life she always deserved.

Dog Stuck In Shelter Over 1,000 Days Can’t Stop Kissing His Family | The Dodo Pittie Nation
13 Best Skin & Coat Supplements For Dogs
Let’s see who the smallest dogs are at dog daycare today! #dogshorts #doglover
My Dog’s Paws SMELL BAD 🐾🐕 (Why and What to Do)
How Do DOGS Know You LOVE Them? 🧍‍♀️❤️🐕