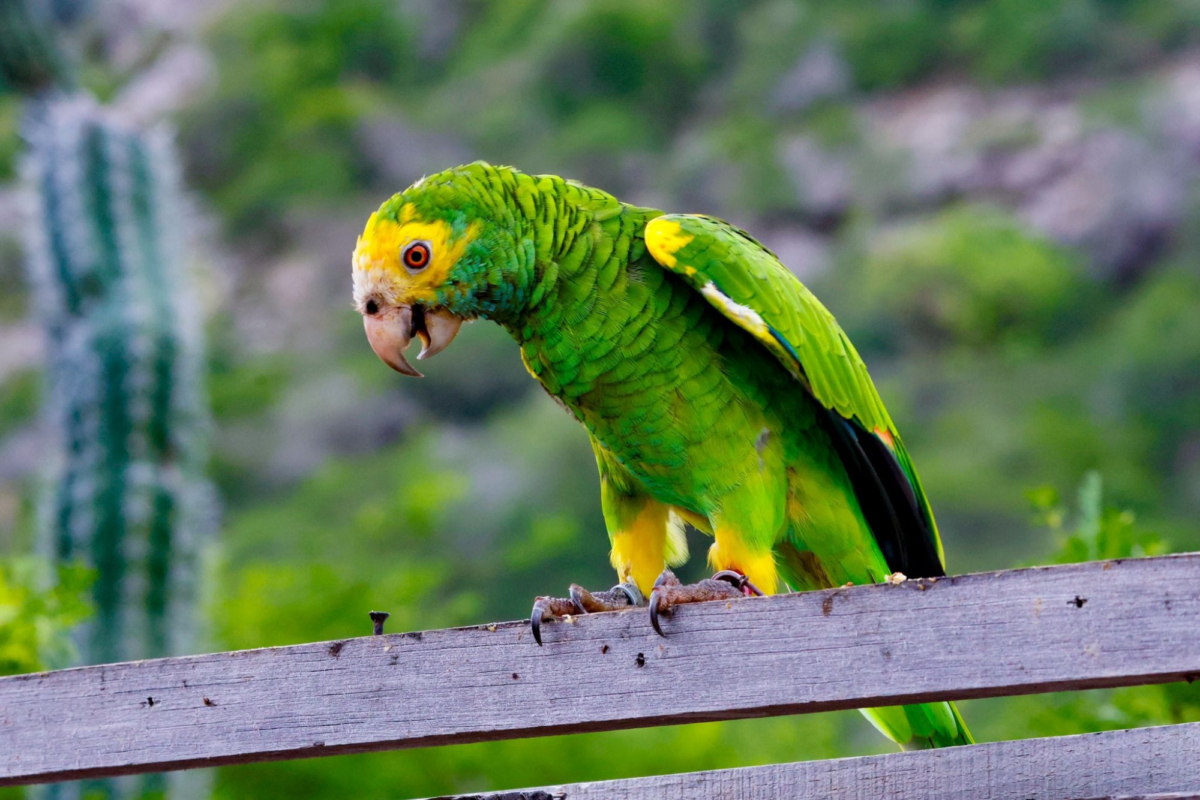 Bonaire is a small island in the Caribbean, just north of South America’s Venezuela. It is one of the native homes to the yellow-shouldered parrot (Amazona barbadenis). This Amazon is considered vulnerable to the threat of extinction, and their numbers are dwindling in other countries. But in Bonaire, their future is looking hopeful thanks to the good works of Echo.

Echo was formed in 2010 by Sam Williams, who you may know from his continuing conservation programs in other parts of Central America. He was followed as Director by Lauren Schmaltz, who is now the U.S. Administrator for the World Parrot Trust. In 2018, the Directorship passed to Julianka Clarenda, a Bonaire native. There are also six local Bonairians on staff. This is the way that conservation succeeds, when the local population assumes leadership to protect their country’s diversity and wildlife.

The local people fondly refer to the yellow-shouldered Amazon as Lora. Perhaps prior to colonization hundreds of years ago, this parrot lived primarily in trees. Once there were fewer trees, Lora adapted to nesting in both the cliffs and trees, a testament to the resilience and adaptability of parrots. At night, these parrots roost in flocks, often in people’s gardens. By day, like most Amazon species, they spend time with only their immediate family. They form long-term monogamous pair bonds, maintaining the same partner across consecutive breeding seasons, though mate switching has been recorded.

In 1980, there were about 400 Lora on Bonaire. Today there are close to 1,200, thanks to Echo’s many conservation projects. For example, Echo created a nursery to grow native plants and trees in order to lead an intense reforestation effort. Once these plants are strong enough, volunteers install fencing to keep out the goats. Then volunteers are recruited for planting, even the children in summer camp help. A whopping 13,000 trees have been planted in the last three years!

Echo also runs a Conservation Center where three pairs of Amazons are breeding for release. These permanent residents are birds that cannot be safely released due to prior injuries or disabilities, but they are doing a great job of helping conservation by producing chicks that will be released. The Center also takes in confiscated or injured birds, brings them to health, and then releases them back to the wild.

Another important effort by Echo is nest monitoring. If we don’t have the data about the problem, we cannot affect useful solutions. Despite an equal number of nests being monitored both in 2010 and in 2021 (25 nests), our 2021 monitoring showed that 19 nests were successful (a 27% increase) and 43 chicks fledged from those nests (a 72% increase). Unfortunately, Echo also found in 2021 that predation and poaching remain real threats against the growth of the wild population (9 died and 4 were poached). Overall, these are positive numbers moving in the right direction and giving hope for the future of this gorgeous Amazon in its native Bonaire!

Lafeber’s $500 GLOBAL PARROT conservation grant this month goes to help with continued reforestation efforts, so that there will be a growing number of trees to support a steady increase of Loras! If you would also like to help, you can make a donation to Echo at www.echobonaire.org. You can also listen to a recent presentation by Julianka and Lauren at www.phoenixlanding.org/past-events.