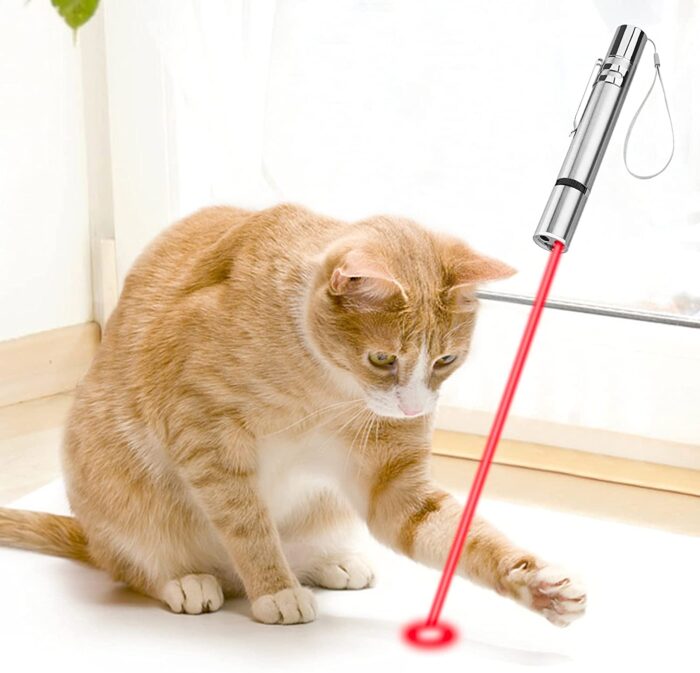 Some cats go wild for laser toys, chasing the little red dot around the house, up and down furniture, and, in Ruby’s case, even up walls. Well, she tried, anyway. Allegra will chase any reflection of light, even if it’s just the sun reflecting off my phone on the wall, so a laser pointer is definitely a hit with her.

But are laser toys really such a good idea to use with cats? And more importantly, are they safe?

Lasers are safe to use, as long as you don’t point them directly at the cat’s eyes. Lasers can damage the retina and, in worst cases, cause blindness.

Because of this safety issue, I don’t like automatic laser toys that randomly shoot laser beams for cats to chase. Since you can’t control where the beam points, there’s too much of a chance that it will shine directly into the cat’s eye. I also don’t recommend letting young children use a laser toy when playing with cats.

A safer alternative to laser toys is a regular flashlight with a small, focused beam. It works just as well, and you don’t have to worry about damage to your cat’s eyes if you accidentally shine it directly at her.

How to use a laser toy the right way

I consider laser toys the lazy cat parent’s toy. After all, all you have to do is sit and point, and your cat does the rest. But is it really as much fun for your cats as it seems to be? It can be, if you use the laser toy the right way.

Cats play to mimic their natural hunting behavior. Hunting involves stalking, chasing, pouncing on and killing their prey. The laser meets the first two of these requirements – stalk and chase – but not the last two. Even if they “catch” the laser by pouncing on the dot, there’s nothing to “kill,” leaving the cat frustrated.

You can avoid this by pointing the laser to a real toy occasionally, giving your cat a chance to actually “catch” something when she pounces on the red dot. At the very least, end each laser toy session by letting the dot land on a real toy so your cat can have the satisfaction of a successful hunt.

Even better, add a second stage to the laser game. When your cat is nice and revved up from chasing the laser, switch to a different interactive toy. You may think your cat is so fixated on the laser at that stage that she won’t want to play with anything else, but you’ll probably find that because she’s now in full hunting mode after chasing the red dot, she’ll pounce on anything that moves. By allowing her to go after a real toy, you’ll make play more satisfying for her.

If you only use the laser toy without adding in a real toy at the end of the play session, you’ll most likely create problems. Your cat’s hunting drive won’t be satisfied, and all that pent up energy has to go somehwere. That “somewhere” may be your legs, or another cat in the household. “It’s like winding up a jack-in-the-box and expecting the top not to blow off,” says Jackson Galaxy. “If used as the only toy in the cat’s play life, the laser pointer can actually help promote further play aggression, and undo the benefits of play therapy.”

This post was first published in 2012 and has been updated.

*The Conscious Cat is a participant in the Amazon Services LLC Associates Program, an affiliate advertising program designed to provide a means for us to earn fees by linking to Amazon.com and affiliated sites. This means that if you decide to purchase through any of our links, we get a small commission. We only spread the word about products and services we’ve either used or would use ourselves.

35 Comments on Are Laser Toys Safe for Cats?