For over eight decades, Betty White, who passed away on December 31, 2021, made us laugh, cry, and think twice about how we can be kind to others—including animals.

A long time advocate for pets and wildlife, Betty White was a zoo commissioner, Los Angeles’ “Ambassador to the Animals,” and even an honorary alumna of Washington State Veterinary Medical Association. So, it made sense that the internet’s viral #BettyWhiteChallenge was a moment where folks donated to their local animal charity, all in honor of White’s would-be 100th birthday on January 17th.

The hashtag campaign was a huge success. Between Facebook and Instagram, Meta reported $12.7 million in donations to shelters and rescue operations. Here are some of the amazing ways pet lovers showed up for the #BettyWhiteChallenge and their animal community.

With their #BettyWhiteChallenge donations, Rescue Haven, a New Jersey-based dog rescue and fostering nonprofit, celebrated the rescue of its first “Betty Dog” from an overcrowded shelter. That’s one less terrified dog on the street, thanks to Betty White and those inspired by her.

In the Name of Love

With its donations, North Shore Animal League, a no-kill animal rescue and adoption organization based in Port Washington, New York, pledged to rescue its next 100 animals in honor of Betty White.

The next ONE HUNDRED animals we rescue will be in her honor of Betty White’s birthday and her legacy as an animal advocate. Make a donation TODAY to help save animal lives and to participate in the #BettyWhiteChallenge: https://t.co/wpMzTwPaCR #GetYourRescueOn #Donate pic.twitter.com/fsn4CuM1yo

Thank You for Being a Friend

In a win for kitties and overworked hospital workers, adoptable cats at a “Betty’s Buddies” event, hosted by Conemaugh Memorial Medical Center in Pennsylvania, comforted and cuddled medical professionals on the frontlines of the pandemic.

We could all be more like Betty White. In honor of the late actress, artist Corie Mattie painted a popping portrait on Melrose Ave in Los Angeles. Titled, “Be More Like Betty,” this mural also has a QR code that you can scan to donate directly to Wagmor Pets, a local and international dog rescue. 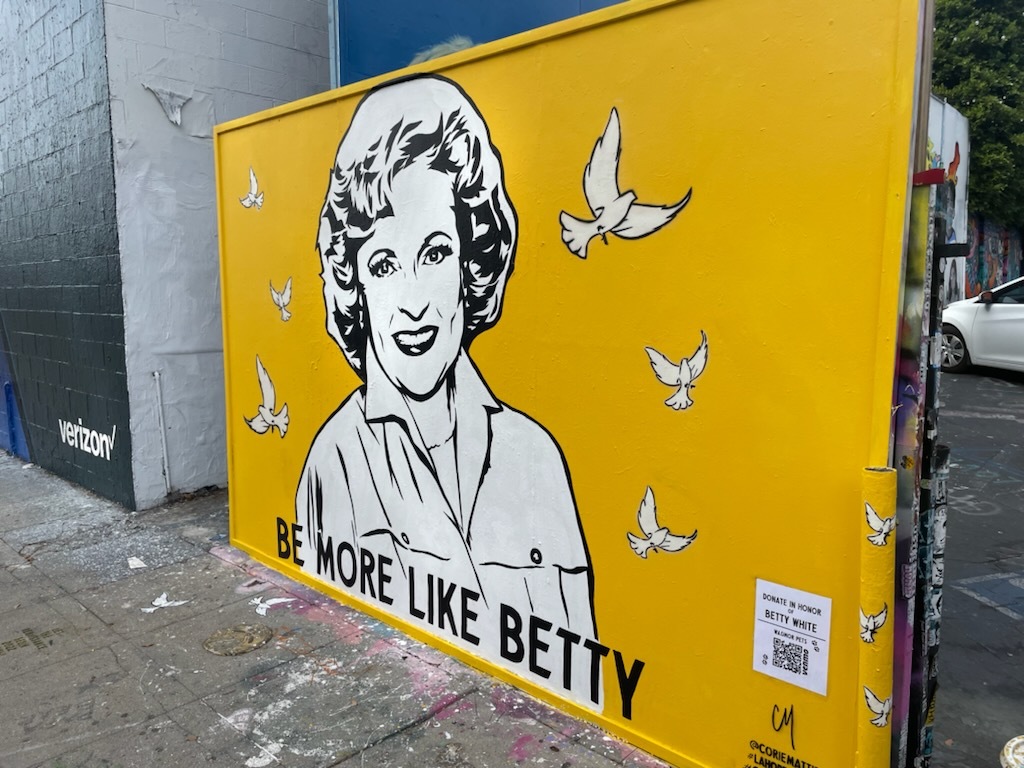 A Torch Is Carried On

One big beneficiary of the viral hashtag campaign is the Greater Los Angeles Zoo Association (GLAZA), where White had a decades-long involvement—she even wrote a book, “Betty & Friends: My Life at the Zoo,” with proceeds benefitting GLAZA and the L.A. Zoo.

GLAZA’s Betty White Tribute Fund has collected over $75,000 to date.

Support for the Toronto Humane Society was just as strong—the shelter reported $91,928.60 in donations, alongside generous pet supply donations, including this young animal lover who dropped off a stunning amount of food and supplies.

Betty White once cited kindness and consideration of others as her formula for youth. Which is why we love Twitter user and cat rescuer Elle Em’s story of rescuing Larvitar, a feral kitten from Spain who grew into a happy, healthy cat. Elle Em reminds us that it’s thanks to the generosity and kindness of people who help out that she’s able to continually care and create safe spaces for kittens out there. Read her entire story on Twitter here.

For today’s #BettyWhiteChallenge let me tell you all about Larvitar pic.twitter.com/MEBqQyMeu1

The Betty White Challenge is still going strong. Every day, animal shelters, rescues, and sanctuaries are posting, with gratitude, about the love and support they’ve received from the recent wave of White-inspired donations.

It’s still not too late to donate to your local shelter—in fact, it’s never too late to help out an animal in need.

10 COMMON DOG BEHAVIORS Explained 🐶❓
Stray Kitten Greets Woman and Tags Along with Her Each Day Until His Wish Comes True
How I Use My Puppy’s Meal for Training! Take 2 Minutes to Try This! #dogtraining #puppytraining
Get your Dog or Cat to Love you More Than Anyone Else
Tails of Hope – Firefly the abused dog