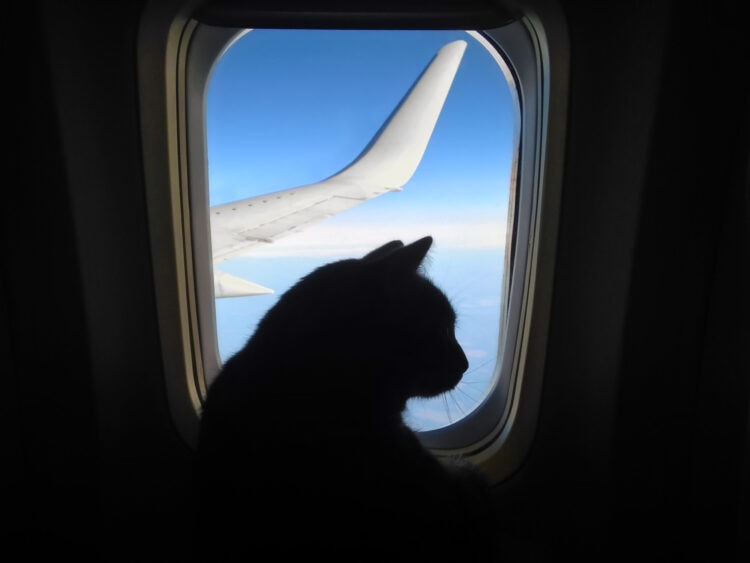 There’s no question that moving with cats can be extremely stressful.  Cats are creatures of habit who hate having their routine disrupted. For some cats, a move is no big deal, but for most cats, the upheaval associated with a move and the logistics of getting them from point A to point B can result in extreme stress.

When I started working on a series of articles about moving with cats, I asked people on Facebook to share their experiences. The response was overwhelming (and you’ll see some of the tips I received in future articles.) What I didn’t expect was to hear from two women who moved their cats via private jet.

Joan moved her 18–year-old cat Grady from Bakersfield, CA to St. Louis, MO. “We initially put together a driving team who would alternate driving,” said Joan. “We had four drivers and planned to do it in three days: Bakersfield to Las Vegas, Las Vegas to Denver, and Denver to St. Louis.” In the long run, Joan decided that would be a real hardship on Grady. He had never been in a car except to go to the vet, and Joan was worried because of his age.

Linda moved her two 11-year-old cats Chauncey and Grace and 8-year-old Maggie Mae from North Palm Beach, FL to St. Louis, MO. She and her partner Joe explored all possible options: commercial flight, driving a rental car, or driving a rented RV. They ultimate decided on a private jet because there were no direct flights to St. Louis. “We were in the middle of a pandemic,” said Linda, “and we would need a third person to fly with us to handle all three cats. Driving would take a minimum off three days and would have to coordinate with pet friendly hotels. The RV would entail a laborious three-day drive. All these options pointed to high stress.”

Linda has advanced Parkinson’s disease. Her major symptoms are stiffness, rigidity, and cervical dystonia. She does not know when her meds will be less effective and will trigger rigidity or a painful dystonia episode. “Any kind of stress exacerbates my symptoms as well,” said Linda. “Being trapped in a commercial airplane seat would be the last place I needed to be. When I ride in a car, I need stretch breaks every hour.”

All of this, and the ease, simplicity, safety, and lowered stress for her, Joe and the three cats led them to a charter flight.

Moving on a jet plane

A private driver picked Linda, Joe and the cats up at their North Palm Beach house and drove them to the Palm Beach International airport for an 11:30 A.M. departure.” He drove onto the tarmac right up to our plane, a Falcon 10 that accommodated seven passengers,” said Linda. Two pilots and three assistants were waiting to greet them. “They loaded the cats in the back row of the plane, each in their own seat. They handled our luggage which included suitcases, bags, air mattresses, and electronic equipment.” Linda sat in the row ahead of the cats on the left side, Joe sat in the next row on the right side. The weather was perfect for flying, and the flight only took two hours.

“They were terrific while in the air,” said Linda. “They each could see us. They were within arm’s length of me. I reached around numerous times throughout the flight and talked to them and poked my fingers into the carriers to touch them. They were quiet and calm.”

When they landed in Saint Louis, a driver was waiting for them. “The cats and our belongings were transferred to the car. Within 30 minutes, we were at our new home in St. Louis.”

Grady did really well with the actual move as well. “He never made a peep the whole time,” said Joan. “The flight was shorter than a commercial plane and we exited right on the tarmac to a waiting vehicle.”

Settling into the new home

Linda and Joe moved from a house that Linda lived in for 42 years, and the cats had not liked all the changes leading up to the move. Professional packers took two days to pack household and eBay inventory. It took another two days to load everything on the moving van. “We spent a couple days in an almost empty house,” said Linda, “but the cats were safely with us and calmed down, that is until the morning arrived for us to finally leave. Thankfully we had a couple who helped with last minute issues like Maggie Mae who did not want to be in a carrier.”

A transition moving consultant had set up litter pans for the cats at their new home in advance. When they arrived, Linda set the carriers up like they were on the plane, and opened the cage latches simultaneously so each cat could leave the carrier at their own pace. “Chauncey and Maggie Mae exited immediately,” said Linda. “Gracie took a couple of hours to assess the situation before she left her carrier.”

The move had an unexpected and welcome consequence. “Prior to this move, Gracie and Chauncey had never totally accepted Maggie Mae,” said Linda. “I noticed a behavioral change the second day. Fighting and picking on Maggie Mae stopped. No one’s territory was invaded. They were now on equal footing.”

“However, they did not like being confined to bathrooms when our moving van arrived four days later!” said Linda. “Maggie Mae and Grace discovered the coziness of crawling into a bathroom wall storage. Chauncey demanded extra food!” As the unpacking process unfolded, they adopted favorite spots. They loved inverted pieces of furniture and hid in large piles of packing paper. “Of course, they never saw a box they did not like!”

Grady’s journey ended with a minor mishap. “When we reached our new home and were ready to exit the vehicle, Grady could no longer hold his bladder and peed all over Mommy,” said Joan. “All our new friends were there to welcome us and I had to run straight to the shower and change my clothes!”

Moving with a private jet does not come cheap. Prices are generally based on the number of hours a jet is leased for and on whether there will be other  passengers on the plane with you. Joan paid $27,000 for her move, Linda paid $19,672.50. She said to her, it was worth every penny. “If we were willing to take an evening flight, the cost would have been $13,813.75, but we did not want to arrive in the dark, late at night. We had purchased the new condo virtually and did not even know where a light switch was!”

Prior to hearing from Joan and Linda, it would never even have occurred to me to move cats cross country this way. While the cost is high, it’s not as expensive as I expected it to be, and it may be a viable solution for some cat parents.

Cat Shows Up for Help After Years Braving the Streets, Now He’s a Big Character with So Much to Give
How Do DOGS Know You LOVE Them? 🧍‍♀️❤️🐕
First-aid Advice for Your Pets
Trapping a sick cat to provide medical care
What’s Mew at Catster: February 2023 Events