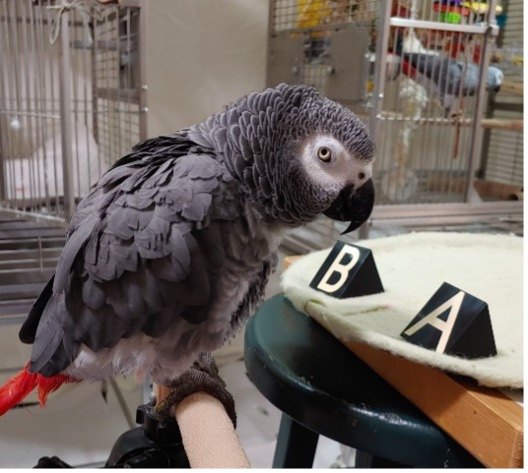 I’m sometimes asked if my parrots enjoy their tasks in the lab, or if they find their testing and training stressful—and whether they have enough time just to “be parrots.” I think the answer to the first question is not too different from what it would be if the subjects were young children—that it depends on the exact type of task that they are being given. As for the second question—well, a huge amount of time in the lab is devoted to play—by themselves or with the various students. Some days, they have about 10 minutes of trials and 50 minutes of tickles for every hour they spend with their human companions!

But going back to the tasks. At the moment, one of our studies involves something called “inference by exclusion”—figuring out where a treat may be hidden after being given information about where it is absent. I’ve previously written about earlier versions of this task; now we are giving a much more complicated version to Griffin, and running the simpler, earlier version with Athena (see figure below). They both really seem to enjoy these trials.

It may be a consequence of getting half a cashew per trial (a huge bonus, as they generally receive only about an eighth or maybe a quarter of a nut for most correct answers)…here because they really have to watch what is happening, we use the larger reward to keep them focused. When we run these sessions, we start with Griffin’s trials. He gets only three per session, maximum because they are so involved and require two choices (and thus the possibility of earning three whole cashews!) And while he is being tested, Athena sits on her cage, squawking for attention, often saying something that sounds quite a bit like “What about meee!?” She is really eager for her turn to start, and she gets five trials (they are much simpler, and therefore much quicker). Interestingly, when we tried to run her trials with organic fruit-flavored cereal pieces, she wouldn’t work at all. But once we started using cashews….

Another one of our studies is about logic, and eventually, it will be quite complex. The first step, however, is very simple: to get both of the birds to tap one of two blocks with their beaks, depending on the alphabet letter attached. The command is either “Touch A” or “Touch B,” and the choice is, obviously, A versus B. Given the kinds of difficult tasks my parrots have previously solved, one would think this would be extremely easy and that they would succeed very quickly—that it would almost be like handing out free nuts. But that is very much not the case. They simply will not score above chance (see image of Griffin giving me “the look” instead of working in the figure below). Maybe it is the small reward (they temporarily paid more attention when I increased the size of the nut reward—but I drew the line at a quarter of a cashew for such an easy task). The situation is quite frustrating for me, and possibly for the parrots as well. Maybe we should follow each correct trial by a few minutes of tickles? Hmm….

Some tasks they will do correctly, if grudgingly. As I write this, we have only one human in lab at any given time (thank you, Omicron), so we can’t do our normal two-person Model/Rival training. Therefore, I try to get Griffin to stand in for a human. It works, but not very well. If, for example, I ask Griffin to model color labels for Athena by asking “What color?”, he gives me a look that seems to say, “You already know that this thing is orange. And you already know that I know it is orange. And I know that you know that I already know it is orange. So, what is the POINT???” After I repeat the question a few times, he’ll usually give me an annoyed feather flooff, then respond. And Athena will often keep repeating a color she already can say, expecting a reward just for talking. Clearly, we all are looking forward to a return to standard training….

Sometimes they really want to learn a new label and Alex, at least, was proactive. For whatever reason, he wanted to learn to say brown, and he would, over and over, tap a piece of a cardboard box and ask me, “What color?” I’d respond, “brown” and then he would ask again. He hadn’t quite mastered it before he passed away, but he was close.

My friend and colleague, Leigh Ann (a former trainer in our lab), says that her birds, Pepper and Franco, whom we sometimes incorporate into our studies, really enjoy the challenges. Maybe it is because we generally ask them to do only the tasks that are the most ‘”fun—like the inference trials. It certainly is NOT because they are otherwise bored. Leigh Ann is always thinking up new foraging toys or other types of enrichment for them. Maybe it is because they get to work with her during the task? For whatever reason, they almost never seem to balk.

Overall, my impression is that—at least for creatures as smart as African grey parrots—giving them various types of tasks is basically a form of enrichment and a form that, for the most part, they really enjoy. Remember that, in the wild, they would be flying about 60 kilometers (that’s over 35 miles) per day to forage for various different foods and for water. They would constantly be on the lookout for predators and would also be interacting with many different members of their flock over the course of the day. It would therefore seem that asking our birds to do some tasks—birds who don’t have to forage or avoid predators—would be seen as a way to keep them as mentally stimulated as they would be in nature. And if they find a particular task somewhat boring, well…they just have to wait a short while and something else will be on the schedule!

Manx
Best Food for Dogs with Diarrhea
Fox Trapped in Net For Four Hours | The Dodo
Cat Shows Up for Help After Years Braving the Streets, Now He’s a Big Character with So Much to Give
My Favorite Moments This Month At Dog Daycare!