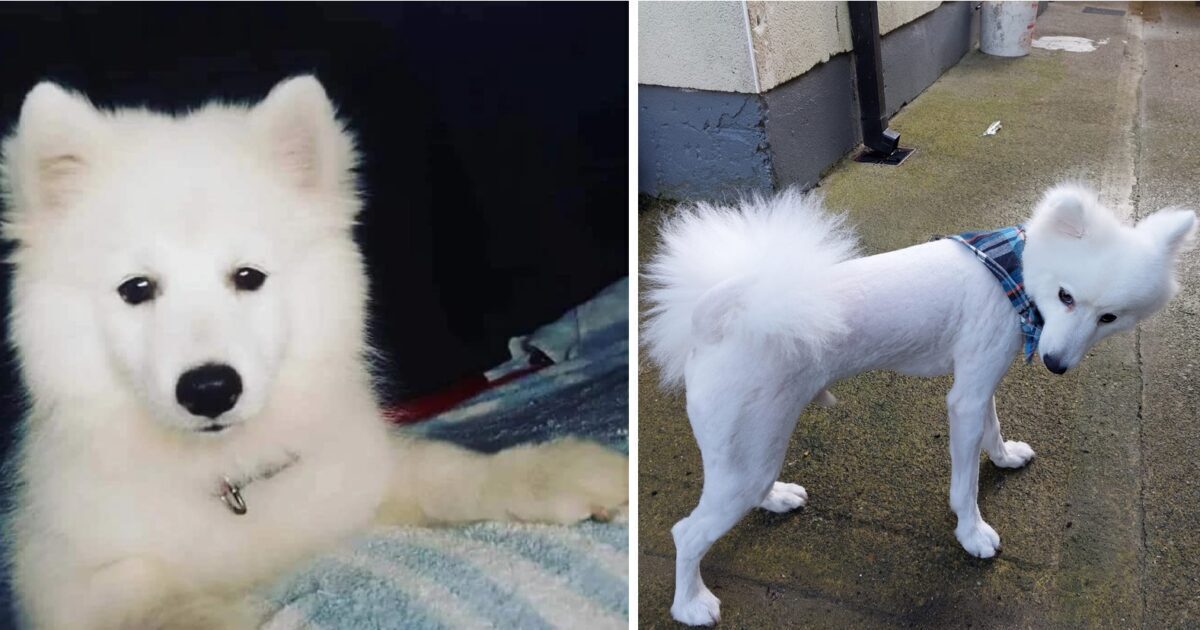 Regular grooming is not just essential to keeping your dog looking pretty; it’s also an important part of maintaining their health. That’s why many dog parents rely on the professionals to keep their pups looking and feeling good.

However, people with certain dog breeds often have a preference for how they want their dog’s fur to look. Show dogs that have to maintain a certain breed standard, in particular, require very specific grooming. Others with thicker coats can’t comfortably regrow hair that’s been shaved.

This is the story of Milo, a double-coated dog whose haircut put his family at odds with the groomers responsible.

The Dog Comes Out Unrecognizeable

When Sheila Kavanagh from Newbridge, Ireland, went to pick up her Japanese Spitz, Milo, from the groomers, she didn’t even recognize him. All his fluffy fur had been shaved off.

“When she went to pick him up, the owner claimed Milo needed a welfare cut, which as a vet, I know they are not allowed to do without the owner’s permission. Milo came out and started jumping up at my mum but she didn’t recognize him at first and thought he was a different dog!”

Kavanagh discovered this groomer through the owner who operates Milo’s doggy daycare, Fluffy Paws. Milo had been going there since he was a puppy.

Initially, Kavanagh left with her dog without complaint, but she later revealed how much it devastated her.

“She couldn’t believe it but she’s not a reactive person so didn’t say anything at the time. As soon as she got home, she rang me straight away and she didn’t sleep for a whole week.”

The Consequences Of Milo’s Big Trim

After discovering some knicks on Milo’s underside, Dooley had him brought to her veterinary practice. These cuts required topical treatment and anti-inflammatory meds.

“I took him into my practice a few days later so the vet could check him over and he was put on medication as he was walking funny and seemed tender and sore.”

Dooley also noted that a dog like Milo could suffer from an improper cut. This unrequested shaving, she said, will require tons of treatment and extra care.

“Double coated breeds can get clipper alopecia after being shaved like that, so his fur won’t grow back the same and he may suffer from alopecia in some areas. It’s going to take a lot of work with conditioners and oil to give him his coat back and we’re looking at at least a year’s worth of work.”

Kavanagh was hoping to start bringing Milo to Kennel Club shows and events, but now with his short fur, he doesn’t fit the breed criteria. Dooley is upset that this opportunity has been taken away from her mom and Milo.

“We bought Milo for mum to give her some companionship whilst she’s off work and the plan was she could take up a new hobby and take him to shows but now, he can’t be shown.”

Dooley said she was able to set up a meeting with the groomers’ owner to acquire a refund for the grooming service. Still, both she and her mother feel the blame for the cut was unfairly put on them.

According to Dooley, Kavanagh had bathed Milo a week before his appointment. Drying a double-coated breed is difficult, so Milo had just a few mats under his belly.

“We felt like the blame was shifted onto my mum but a welfare cut can not be performed without the owner’s permission. He was matted but not as matted as he made out he was.”

The groomers have not yet responded to news organizations for comment as of this post. Dooley did say the groomer admitted some responsibility:

“The owner admitted the groomer was unqualified and was employed based on experience rather than official qualifications.”

Most of the time, the experts know what they’re doing, but in this case, it seems a mistake or miscommunication occurred somewhere. Learn some tips for grooming your dog at home here.