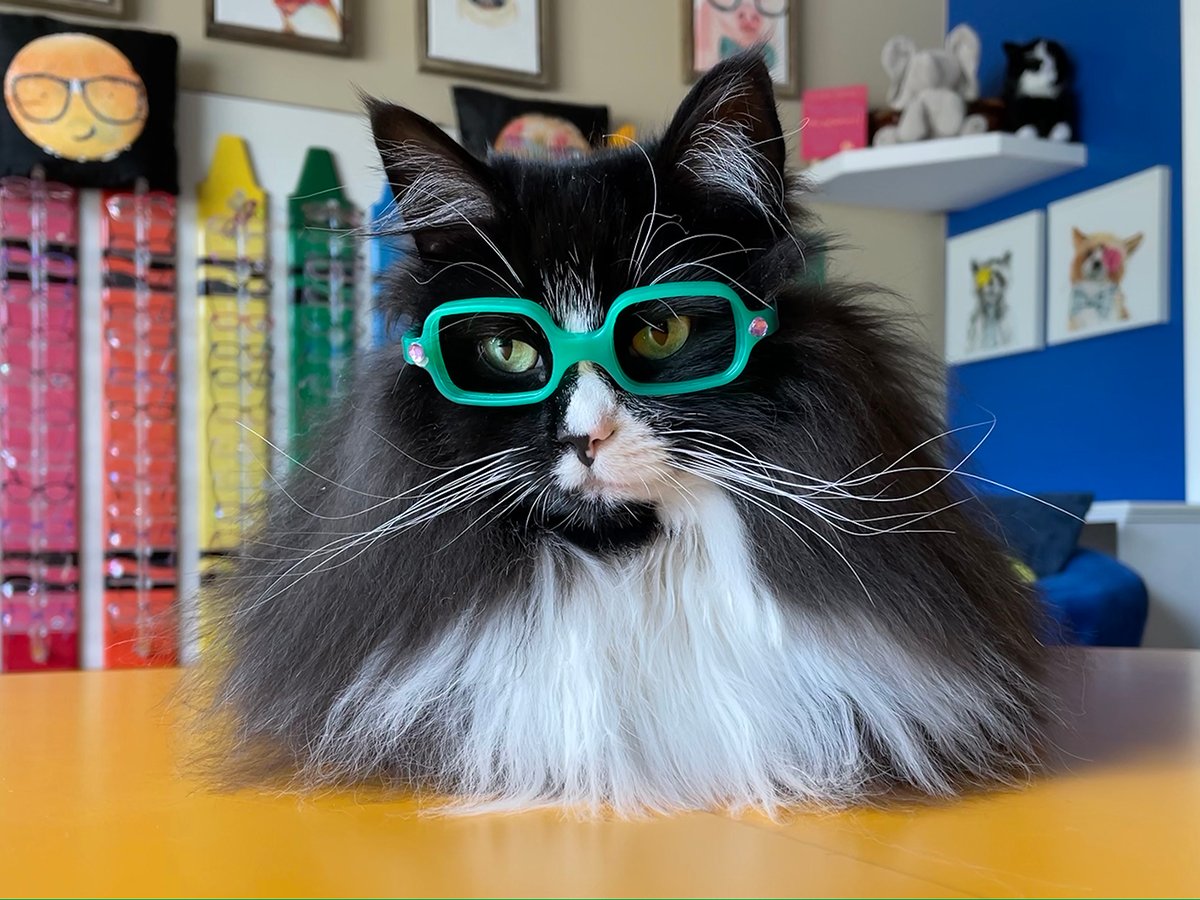 It’s a popular misconception that cats are totally color blind. Turns out, cats do not experience the world like Dorothy before her fateful trip to Oz. But! That doesn’t mean that our little feline friends experience color in the same way as people with normal color vision.

So, what colors do cats see and how are they different from what humans perceive? What other important differences do cats have in their vision? And, what would happen if you put color blindness glasses on a cat?

That’s where a kitty named Truffles comes in.

Truffles is not your average cat. In fact, we’ve reported on this wonder feline before, a few years ago when she became known as a friendly kitty who helped kids learn to like their new glasses.

Found as a stray kitten by Danielle Crull, a Pediatric Master Optician at A Child’s Eyes, Crull discovered Truffles was smart as a whip. She easily learned tricks from Crull, such as waving and giving a high five.

“I wondered if she would be willing to wear glasses for me in hopes that she could demonstrate to little kids that there is nothing to be afraid of,” says Crull. “Turns out I could—and she actually takes her job very seriously!” Truffles has become an integral part of Crull’s team, helping children feel relaxed and confident about eye exams, fitting, and wearing glasses.

Color blindness, or color unawareness, is one visual condition that can affect young children (statistically more common in boys than girls) that also affects felines, so Crull wondered what would happen if Truffles tried out a pair of color blindness glasses for herself.

“Cats can see some colors, just not as vibrantly as we do,” explains Certified Cat Behavior Consultant, Dr. Mikel Maria Delgado. “They mostly can see yellows, blues, and maybe some greens.” Delgado says it’s likely that red, and even some tones of green, may appear gray to cats.

“Humans who are red/green color blind have red and green cones that are somewhat defective, and overlap in their sensitivity to color, making it difficult for the person to distinguish between the red and green colors around them,” says Crull. “Cats only have the yellow/green and the blue/violet cones. This makes them see the world similarly to humans with red/green colorblindness.”

Prior to Crull creating the color blindness glasses for Truffles, the kitty didn’t seem to show any obvious challenges to seeing color generally. But, she appeared to have a fondness for a pair of green-framed glasses that were made for her. “She loves her green glasses the most and will always choose them over any other color,” says Crull.

Keeping the similarity between cats and red/green color blind people in mind, Crull made Truffles a pair of comparable glasses.

The million dollar question is, do they actually work?

“I don’t know. I wish I could teach her to take a color blindness test!” says Crull. “I’m not sure I could get her to actually see a true red color without the red/orange cone, but I do believe the glasses create a larger gap in the color red, giving her a chance to see things in a new way. Perhaps if the red light is changed enough that the blue/violet cone can perceive it, she would actually see the red color enhanced in her vision.”

What I can say, for sure, is that she loves what she sees.

Though it’s not entirely certain what Truffles can see with her new glasses, one thing is for sure: she doesn’t hate them! When Crull first tried the color blindness glasses on Truffles, the kitty’s head popped up and she looked around the world as if for the first time with fresh eyes.

“I always let her pick her glasses and every time she chooses her new color blindness glasses, even over her previously favorite green pair.” In fact, getting Truffles to take off her color blindness glasses is a bit of an issue: “I kind of have to sneak them off of her.” When wearing her new glasses, Truffles enjoys looking at everything, she also purrs and plays with toys, enjoying the experience.

“It’s all theoretical at this point that she could actually be seeing what we think of as ‘full color,’” says Crull, “but what I can say, for sure, is that she loves what she sees.”

Without colorblindness glasses, is a cat’s quality of life somehow diminished?

It’s unlikely, says Delgado. “Cats’ visual abilities are largely shaped by their survival needs. They don’t need a lot of color discrimination to hunt, mate, or stay safe, so it likely doesn’t really impact them.”

So, even though sight is a big deal to us humans, “for other species,” says Delgado, “vision just isn’t as critical, because they have much better hearing or sense of smell than we do.”

Interestingly, another visual condition that can affect cats is nearsightedness. “Cats do not see well in the space within a foot in front of their face!” says Delgado, who explains that sense of smell and whiskers are important ways to help cats sense things that are close to them.

As we continue to learn more about how cats perceive the world, it’s good we have a kitty like Truffles who is willing to help illustrate how cat vision really works—and looks so cute doing it.