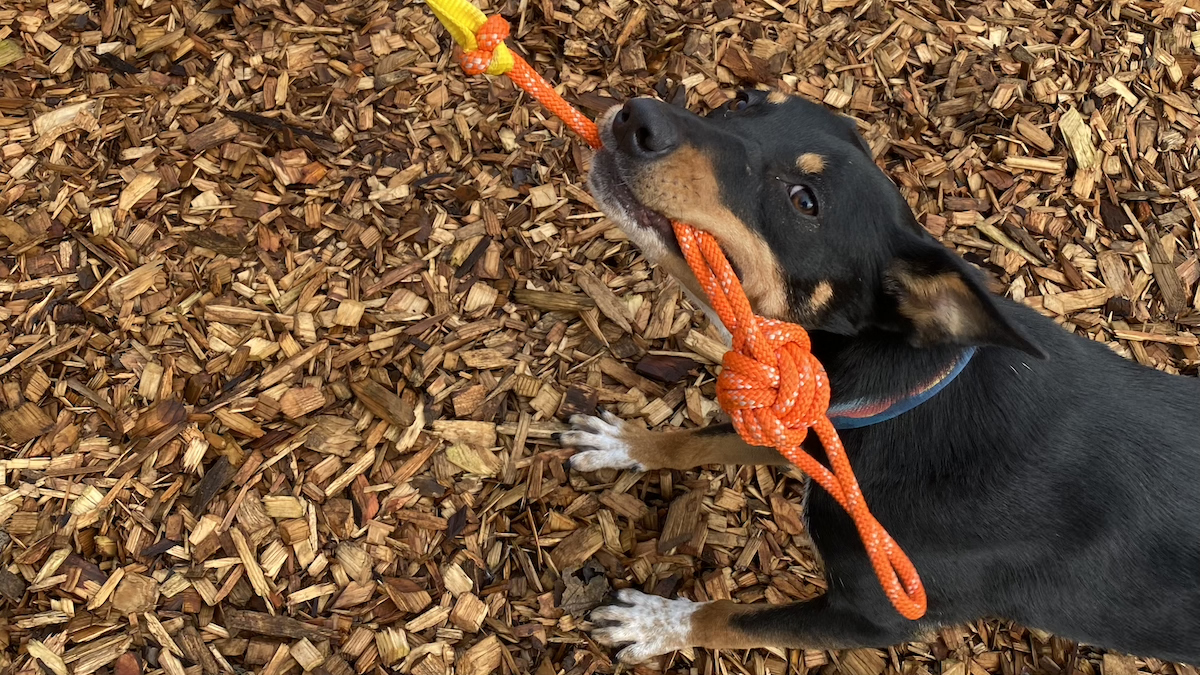 For many dogs, tug-of-war is a love-at-first-bite kind of game. That’s definitely true of our Australian Cattle Dog mix rescue, Pepper. She’s got a ton of energy and loves to play. She will bring you just about any toy for a potential round of tug, even old plushies that are barely hanging on by a thread. However, playing with dog tug-of-war toys can be as much of a workout for her humans as it is for her. So I was thrilled to learn that some toy makers have come up with tug toys that a dog can play with on their own with just a little human supervision.

Why Do Dogs Need Toys?

Dogs need mental stimulation and physical activity so they stay healthy—and are good and tired enough they won’t get a chance to be destructive. Sometimes, though, you’re not quite up to the task of roughhousing with your dog and need an alternative option that keeps them busy without your input.

The need to entertain high-energy pups has led to some creative solutions. That includes a new wave of high-tech dog toys for indoor play (check out Pepper’s Wickedbone smart bone review) along with the opposite: some decidedly low-tech but effective toy and game ideas that allow your dog to play independently. This led us to the world of self-playing dog tug-of-war toys.

The concept is pretty simple: a long strap that wraps around a tree or structure is connected to a bungee cord, and a rope toy is connected to the end of the bungee. There are a handful of tug toys like this on the market, but for testing purposes, we checked out XiaZ’s tug of war toy for dogs.

The XiaZ tug-of-war set came in a handy carry bag—a fun bonus that means easy storage and may just inspire you to take this tug toy with you, so you can set it up wherever there’s a strong support and your dog might need a little distraction.

It comes in two parts: the main strap that has a large built-in carabiner that loops around your structure, and the strap with a bungee section and a rope toy on the end, which you connect to the loop via the carabiner. The bungee helps give the bright orange rope toy some extra movement when your dog pulls. 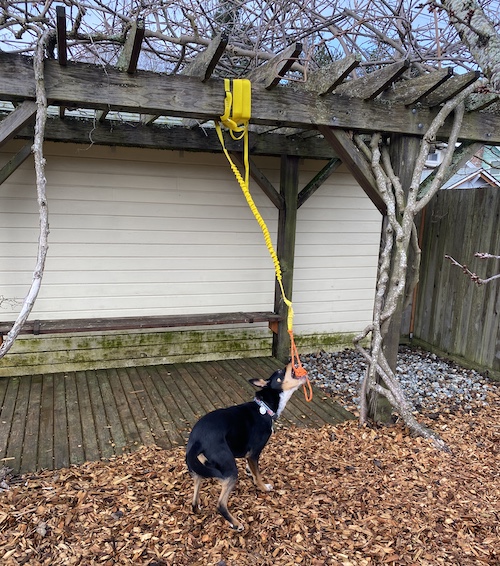 Pepper demonstrates how to use a tug-of-war toy.

Pepper knows a toy for her when she sees it, and this bright contraption had all the marks of fun times ahead. She’s a seasoned tugger, so she pretty instantly grabbed the knotted rope at the end of the long strap before I even had a chance to attach it to anything.

I attached the tug-of-war toy strap to a solid wood pergola. There are a couple of ways to adjust the length: you can use the buckle on the bungee strap itself, or you can simply wrap the strap around your chosen anchor as much or as little as you want. We started with a long bungee to see how things would play out. But our dedicated chewer decided she could maybe get that rope free by sawing it off at the ribbon with her teeth in between robust tug sessions.

So we shortened the strap so the dog tug-of-war toy was swinging instead, and Pepper couldn’t easily reach the bungee/rope connection. This gave it more movement, with Pepper stretching the bungee and letting it go, chasing it, catching it, and starting all over again. 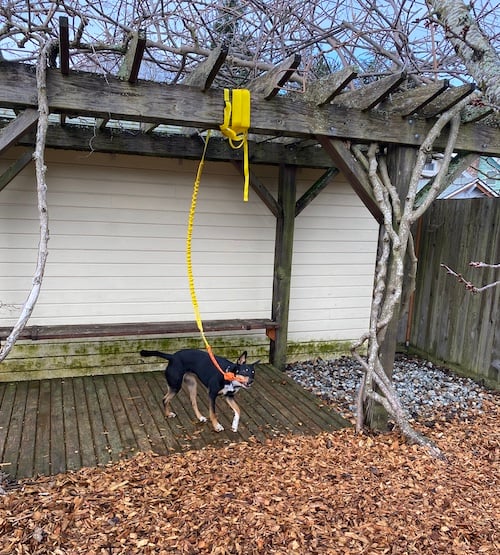 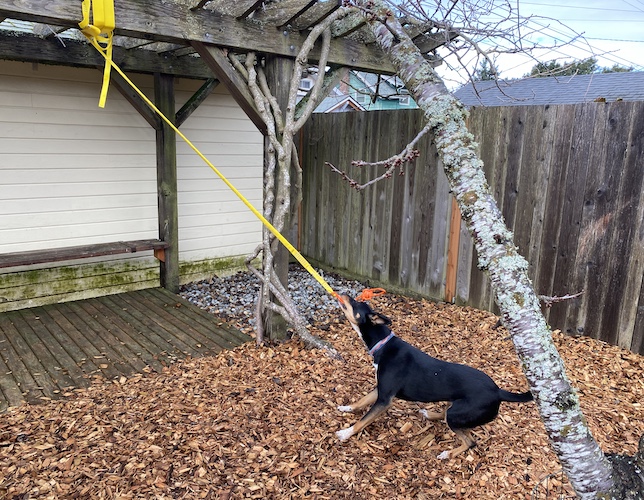 It worked great—Pepper put her full 40-pound self into pulling on that rope. The bits where she had chewed into the strap of the tug-of-war toy have been holding as strong as ever.

Later, we had her friend join her, an Old English Sheepdog. She immediately caught on to the game too. 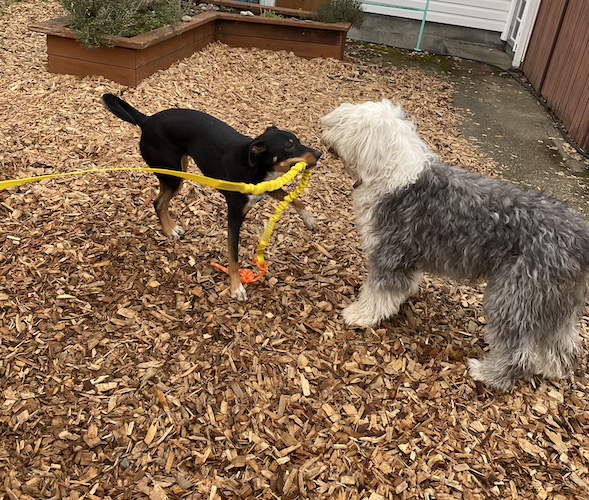 “Check this thing out!” 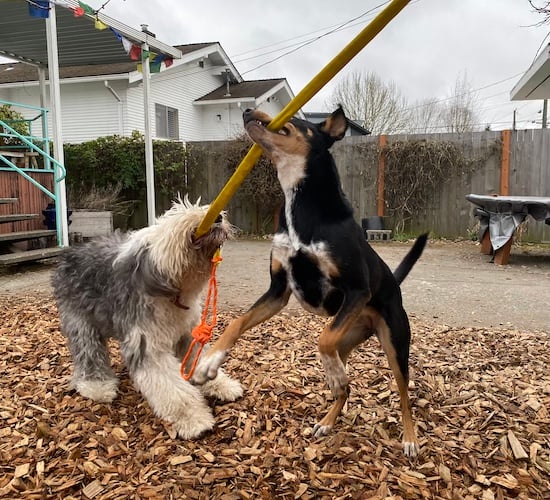 Pepper and her best buddy Freya test out the dog tug-of-war toy.

We had many play sessions with this dog tug-of-war toy, and each time Pepper looks forward to playing with it. When finished, I wrap the end of the toy up high to give Pepper a break. She has several times been out in the yard and looked up at the toy, waiting for me to unwrap it. 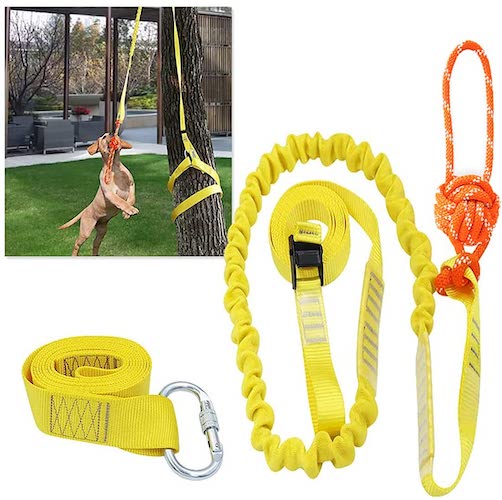 Is This Dog Tug Toy Worth It?

Absolutely! This dog tug-of-war toy is a great evolution of a classic toy that lets dogs play independently and pet parents take a break from playing yet another round of tug themselves. (We love tug games, of course! But perhaps not quite as much as our dogs.)

Cons: None that we could find!

Dogs of all kinds are very likely to want to give this tough, low-tech toy a whirl, particularly if they’re fond of rope toys and tug games in general. Humans will love that they can let their dog run outside and have at it with just a little supervision—plus they can get in on the fun any time by moving it around and challenging their dog to catch it.