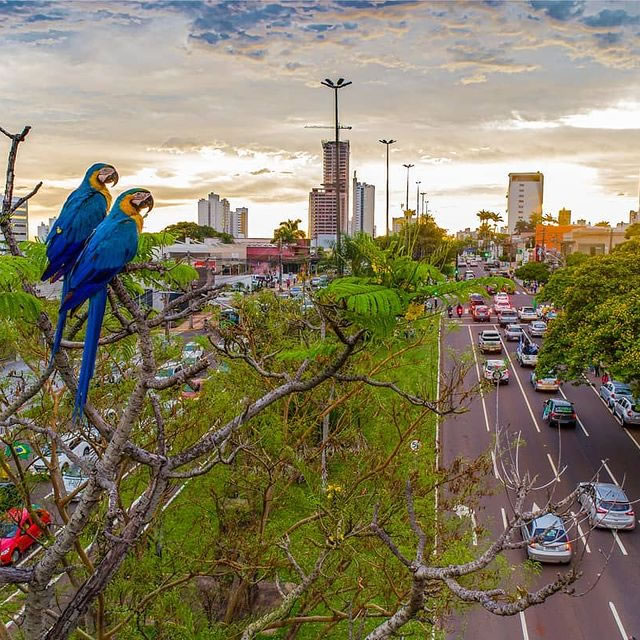 In conservation, the story is almost always the same – loss of habitat and food sources, poaching, climate change, and a need for community support. These significant challenges affect many parrot species across all continents.

We’re headed back to Brazil, to the metropolitan city of Campo Grande, where the Instituto Arara Azul has found a novel way to address all these challenges at once. Instead of only focusing on protecting macaws in less populated areas, they are also making it safe for macaws to nest and live in this major city of almost one million. The Institute has created community programs to engender appreciation and protection for the birds and the effort has blossomed. Making it possible for the parrots to thrive in the city is an innovative idea, and perhaps a critical one for the survival of some species. Humans continue to consume more and more of the earth’s land, putting more and more species at risk.

In a prior post about the hyacinth macaws of the Patanal in Brazil, I told you about the Instituto Arara Azul, Neiva Guedes, and her amazing team. She knows how hard it is to preserve native land and rebuild a species. Neiva has also created the Projeto Aves Urbanas – Araras na Cidade (macaws in the city). Its main goals are to monitor the reproductive success of the birds in the city by registering nests, taking photographs, and recording data about nest building, egg laying, parental feeding, fledging, and juvenile flight. Over 80% of the nests have been fully successful from egg laying to juvenile flight, a remarkable accomplishment! Originally it was the blue and golds making nests and surviving in Campo Grande. They are now been joined by a number of greenwing macaws, and a growing number of unusual hybrids (what we call harlequin macaws).

Having visited Neiva and her team in Campo Grande several times, I can attest first-hand to the remarkable work the Institute is doing, both in facilitating a city-based macaw population as well as expanding a body of scientific knowledge about macaw reproduction and species preservation. The community takes great pride in their local parrot populace and helps to protect nests, whether it’s a tree is in the meridian of a busy road or a tree cavity in their back yard, as exemplified by the extra accessories (roof and deck) a family provided for their blue and gold tenant.

Lafeber’s $500 GLOBAL PARROT conservation grant this month goes to the Instituto Arara Azul to assist with the community effort to build a thriving macaw population in Campo Grande, and the Instituto Arara Azul team that helps to monitor their health and safety. You can also help! To make a tax-deductible donation go to https://parrotsinternational.org/index.php/donate/ and choose the Hyacinth Macaw Project.

If you would like to learn more about the macaws of Campo Grande, here are some informative links:  https://www.institutoararaazul.org.br/projetos/projeto-aves-urbanas-araras-na-cidade/

Link for Capital of Macaws for Campo Grande:  https://www.campograndedasararas.com.br/