For anyone looking to add cat cuddles to their life, the idea of a cat café might be right up their street. Adopting a cat isn’t possible for everyone so visiting a café where you get the chance to stroke some friendly moggies seems perfect. Throw in a nice cup of tea or coffee and some cake, we can’t forget the cake, and it’s like a cat-filled dream.

The first instance of a cat café was in the late 1990s in Taipei but the trend later took off when it reached Japan in the early 2000s. Since then, cat cafés have popped up in countries around the world. But are they really all they are cracked up to be? Let’s discuss whether cat cafés are good or bad for cats.

Please bear in mind that this is a generalisation and does not apply to all cat cafes. In fact, there are many cat cafes that provide large areas for their cats to hide in without visitors to the cat cafe being able to enter these areas.

Cats generally mark their territory through scent, whether that is using glands on their paws or cheeks, or if it’s through more traditional means, i.e., urine. Either way, with so many thrown into the mix in a cat café, territories can become muddied.

This can result in cats becoming territorial over certain areas, including where the food is provided. The blocking of food can lead to some cats missing out on vital nutrients.

There is no hiding the fact that cat cafés typically have quite a few felines residing there. That can make it much harder for those running the café to stay on top of their cat’s welfare. The organiser might be busy in the back and not notice one of their cats displaying telltale signs of stress.

Such examples of stress include:

With the hustle and bustle of a busy cat café, it would be easy to miss picking out the signs of stress in one cat out of a crowd. Particularly if that cat has withdrawn from the main area and isn’t being monitored with the rest of the cats.

Anyone who has lived with a cat will know that they like to go missing from time to time. That escape provides them with a little alone time for sleeping and just removing themselves from any stressful situation. That’s much harder to achieve in a busy café setting.

While many cat cafés do provide their cats with a retreat away from the customers, what happens when these are being used by other cats? The Cats Protection charity opposes these settings due to “the risks of stress, disease transmission and poor welfare for cats.”

A revolving population of people

Cats living in a settled environment are ultimately happier for it. The ever changing flow of café visitors coming and going adds to the stress levels suffered by some of the cats in these establishments.

“Cat cafes are not a suitable environment for cats because they are in a confined space with a revolving population of people,” says Nicky Trevorrow, behaviour manager at Cats Protection.

Cats require daily care, and while they don’t need to be walked as dogs do, they still need exercise and stimulation. Keeping them confined to a relatively small area can increase the chances of diseases or viruses spreading among them. This might only be exacerbated if the buildings themselves are not fit for purpose or were not given an adequate survey before being converted into a cat café.

For example, damp, moisture or mould in the building can be hard to detect, while timber problems like pest infestation are not ideal when there are plenty of bodies around. There is also an argument that a lack of proper regulations for cat cafés can see animals living in suboptimal conditions.

A way for cats to find a new home

Not all cat cafés are run as for-profit businesses. Some seek to run them as a means for people to adopt the cats they interact with. With conditions in some adoption centres less than ideal, finding new homes for cats by alternative means is a positive thing.

Of course, there is also the fact that the cat café becomes a new home for a cat seeking adoption. The option of a more comfortable life with regular food and interaction with people is arguably better in a café. However, the UK charity Cats Protection argues that a rolling cat population further increases stress for cats in these cafés.

Cats are seen as independent creatures but they still enjoy human interaction, anyone whose moggy curls up to them on the sofa would know as such. There are plenty of opportunities for cats to interact with people in a cat café, especially as that’s generally the reason why people are there in the first place.

Those who perhaps wish to adopt a cat of their own but can’t due to living arrangements get their cat cuddling fix at these cafés. Cats that are receptive to such social interaction can bask in the strokes and cuddles, while those that prefer quiet can retire to their secluded quarters.

While cat cafés are often busy environments, they typically don’t have more cats than there is space for. This is not always the case at adoption homes and centres, where charities and organisations often struggle to move their cats on.

When a large number are forced to live in confined spaces, it removes the comforts that many domestic cats require to thrive; things like hiding places and somewhere that’s truly theirs. There is arguably less stress involved at a cat café versus an overcrowded adoption home.

Contrary to a commonly-held belief, cats are quite capable of cohabiting with other felines. In the wild where there is a scarcity of food to fight over, cohabiting isn’t possible without fighting, but domestically that’s less of an issue. As long as there is a regular provision of food, cats are less inclined to become super territorial, but it still requires a careful selection process by adoption homes.

Those adopting cats for a café should consult with the adoption centre to identify the cats suited for living with others. It’s important for the cats living together to see themselves with the same social standing. This can be started before they meet face to face by gradually swapping their scents to each other through rags until they no longer react negatively to the scent.

If cats are scent swapping through grooming and sleeping while touching each other then it suggests they are comfortable together. There can even be multiple social groups within any given colony. 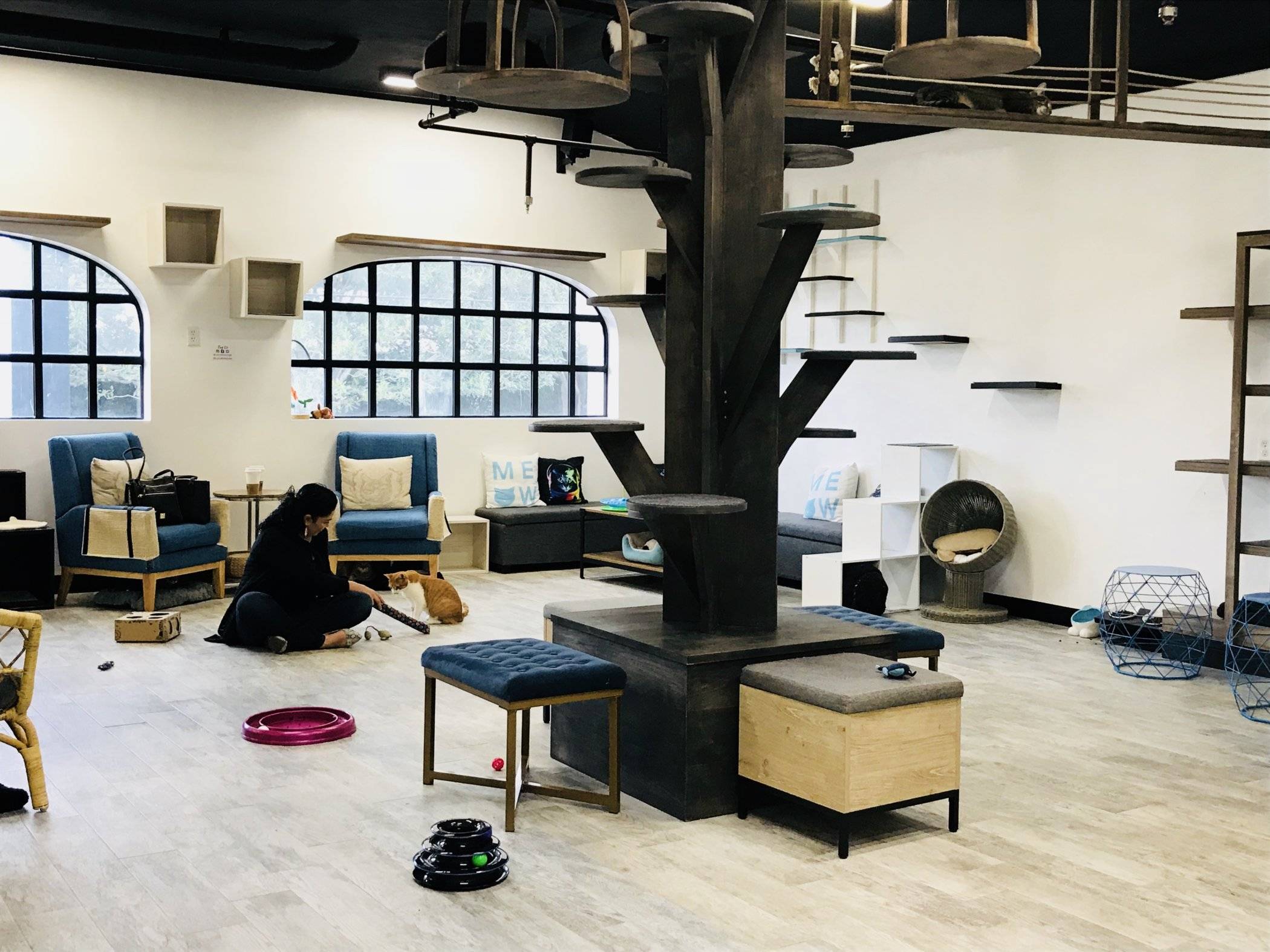 Cat cafés: a question of ethics?

Like with many things in life, whether a cat café is good or bad falls into a grey area. On one hand, they provide food and shelter for cats that may have otherwise been stuck in an overcrowded and underfunded rehoming centre.

On the other hand, many believe forcing cats to socialise with other cats, and humans, isn’t fair and can lead to unwarranted stress and anxiety in our feline friends. It would be nice to think that the majority of cat cafés have been created by cat lovers who are only doing what they think is best for their beloved animals.

Not all cat cafés are equal, however, and some cat café owners might well be interested in making money over the welfare of their residents. Whether a cat café is good for cats can only be taken on a cat-by-cat basis but, overall it’s probably better if they found a home rather than a café to live in.

Training our puppy to stay  #Dog training 
The Ultimate Guide to Raising Newborn Pets Get All the Care Tips and Tricks You Need!
BEST LAUGH CHALLENGE – These HILARIOUS FAILS will make you rolling on the floor laughing!
Kittens Found Living on the Streets Travel to Another Continent to Find Dream Home Together
Kittens Both Rescued After Storms in Unique Ways Find Their Path to Each Other One Day