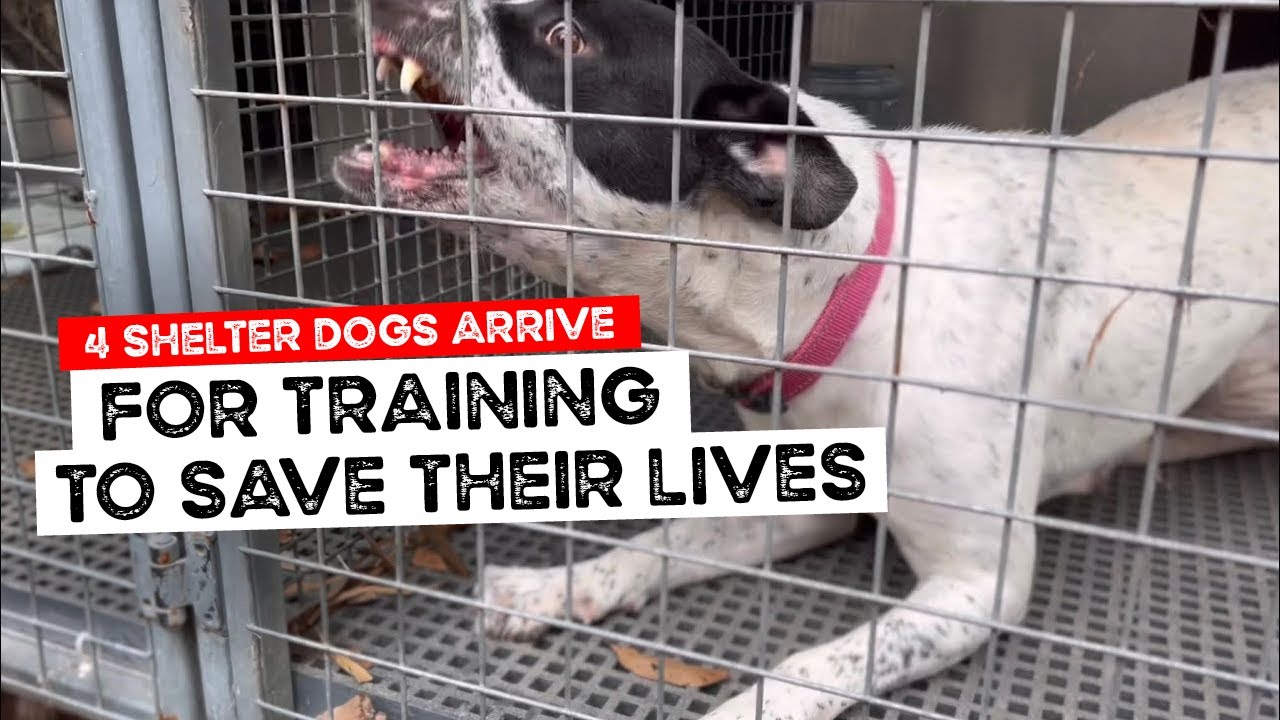 In an emergency effort, 4 dogs at the shelter now have come to the farm to avoid being put to sleep.

At this stage the shelter have not been able to find homes. For us, this is understandable. These dogs could be managed to some extent I guess, as Shadow could have been, as well as the original shelter dogs like Freddo, Yoyo, etc. But who is going to take on that responsibility? The percentage of people that do is slim. It’s why they have ended up here.

The shelter needed to find a solution for these 4 dogs within 72 hours or else they had been ordered by council to be put to sleep.

So in a last ditch effort they are here to be trained.

We have moved around resources to put in an intense two week period of training. This will give us an idea of where they are at in terms of future expectations and how to move forward. They’ve completed 3 days so far and already they so desperately want to do the right thing. They just need the right guidance.

What we know is that right now we are their best chance of making a turnaround. But most importantly, their only chance of surviving.

This really is life and death. It’s important to reflect on this, because these dogs are going to have to dig incredibly deep to make it.

But we will be here every step of the way helping them, guiding them, going into battle with them.

The four dogs that arrived Monday are as follows …

Chance the American Johnson Bulldog who has been described as having referred aggression. That is, aggression towards the handler when reacting to other dogs.

Molly the Cattle Dog X, who is the mother to the Cattle Dog litter that just left the farm. Remember Mr Blue and Miss Green just gone. Molly is highly aggressive to dogs only.

And Rosco the … well your guess is as good as ours. He looks like a mix of several breeds likely mastiff. He has been trained to be guard dog aggressive. Guarding a drug house from what we had heard.

Don’t watch the video if you feel that seeing a dog behaving ‘badly’ is hard to watch. We make absolutely no judgement.

What I do ask, is for your support if you don’t mind lending us a beacon. NO I’m not asking for donations. We’re a business, not a charity. We’re choosing ourselves to donate all our resources to these 4 dogs, along with the 20 odd puppies in our care, other foster dogs, dogs with special needs (the vet bills this week alone for rescue have cost us $13,500).

You could simply help us out during this time by subscribing (FREE) and watching more of our videos on YouTube. Watch an advertisement or two while you make a coffee. Maybe you might like to join our Behind the Scenes members section to watch more videos for a month or two, it’s only about $7.50. We’ve set up our YouTube channel to sustain the rescue work we’re doing so we don’t have to ask for any funds. There are plenty of rescue organisations out there that truly NEED those funds. That’s not how we want to do this. We’ve spent years building up our social pages and during lockdown we decided to properly monetise the YouTube account. Initially because we had no revenue coming in with lockdown, but now with day care back, we want to use it to do the rescue work.

Your support is what allows us to help these desperate dogs. To give them a chance. Because has anyone even tried yet? To see if hey, they can be rehabilitated. It looks like they’ve again, only been taught to do the wrong stuff.

We are going to turn comments off at this early stage on the public videos of these dogs’ journeys, unfortunately we got a lot of negativity on the first videos of Shadow that we posted. It’s all very positive now, so just the first little while.

There will be videos in the training academy of their training, there’s already a few from the last 3 days.

To you all who have positively encouraged us over the years and especially during this last 6 months of doing our bit for rescue dogs, THANK YOU. This community is incredible, your positivity gives us strength and energy to always want to do more.

Here is a link to our YouTube channel if you haven’t subscribed to it yet. Maybe you could let a friend know. There’s a join button at the top of our channel homepage you can access on a desktop computer if you’d like to join for the behind the scenes videos or the training videos.

Feline Actors: Our 20 Favorite Movies Starring Cats!
Adopting A Pet Bird Might Be Your Best Match
This Treehouse Has A Secret Bedroom Behind A Bookcase! | Treehouse Masters
Trending Now in Cat Foods & Treats
Cat Living Outside Finds Kind Person Who Doesn’t Give Up on Him, He Turns into a Real Softie