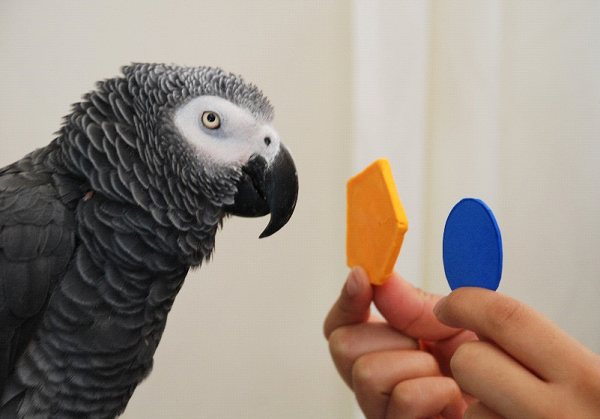 All my parrots use the sounds of English speech to communicate with me and with the students in the lab, but none to the extent that made Alex so special. Much of that had to do with Alex being an “only bird” for the first 15 years of his life—with a small army of humans who spent about 10 hours/day vocally interacting with him on a one-to-one or two-to-one basis.

Some of that had to do with the different training our subsequent birds experienced. For example, we tested several alternative procedures with Griffin, none of which were nearly as effective as the M/R technique that was Alex’s only training; thus Griffin had much less useful input during his early life, and that likely affected how much he was willing to learn later.

During Athena’s early training, we could never arrange to give her long periods with only human interaction so that she would want to learn more speech than parrot squawks. (By the way—as I’ve noted before, she can talk very well but simply doesn’t often care to do so!) Although I don’t think Alex was particularly gifted, he did interact with us to an extraordinary extent, and his skills can best be appreciated by describing several of his vocal activities.

Alex engaged in a particular behavior pattern exclusively with new students; they probably thought he was hazing them, but his actions likely had an origin in nature. Each time a new student came into the lab, Alex would ask for everything in his repertoire—all of his toys, all of his foods, things of various colors and shapes—a constant barrage of “Want X!” These actions would not have been quite so annoying had he actually wanted any of these things; what he did was beak them for a moment and then almost immediately toss them to the ground, only to then shout out “Want Y!” To keep the students engaged, I had to explain what I thought was the real reason for Alex’s actions: that he wanted to make sure that he and they shared the same repertoire so that they could become part of his flock. Very likely something like that happens in the wild when a new bird tries to join an existent group—all the birds need to be able to communicate fully with one another, so they likely test out their understanding of each other’s utterances, and the incoming bird can then learn new vocalizations if necessary.

Sometimes Alex would act as though he expected me to figure out what he meant even if he wasn’t initially making his message clear. I’ll never forget a particular instance, which had to do with one of his favorite foods, grapes. At the time, we were at Purdue University, and finding fresh, beautiful grapes in Indiana in the middle of winter in the late 1970s was a challenge. I was thrilled when I was able to obtain some particularly lovely green ones at the local grocery store—and couldn’t wait to be able to respond to Alex’s “Want grape!” with something other than “Sorry, not today.”

Thus I was quite surprised when I handed one over and he promptly tossed it in my face, and then repeated “Want grape!” He tossed the next one back as well; I ate it, telling him it was “Yummy!”—thinking that maybe it had been so long since he had had grapes that he didn’t recognize it. We went through the interaction once more. Finally, he looked at me, ruffled his feathers, and said, “Want grape….URP-LE!” (for some reason, he had trouble with the initial /p/ in “purple”). Point taken…..green ones just weren’t acceptable, no matter how big and juicy.

He also used his speech to bully Griffin. We would ask Griffin to identify the color of an item, and Griffin would softly say something like “gree…” From the next cage, Alex would shout out “Talk clearly! Say better! GREEEEEN!” Griffin would scrunch down, look sheepish, and stop talking. Or Alex would look at Griffin and say “No! Tell me what shape?” Griffin would look at me, look at Alex, literally shrug his little birdie shoulders as if to say “To whom should I respond??”…and again go quiet. Poor Griffin.

As I mentioned in last month’s blog, Alex would also ask questions in order to learn new labels for objects, colors, shapes, and foods. I never thought too much about that behavior, until a colleague studying nonhuman behavior pointed out that the apes in animal-human communication studies never did so. Some of them, like Alex, would address the problem of dealing with an item they couldn’t name by devising new labels from existing ones (e.g., Washoe called a radish “cry-hurt-food” and produced “water-bird” for a swan; Alex devised “yummy bread” for cake, “banerry” for apple, “cork nut” for almond, etc.).

The apes also always routinely responded to questions, but evidence of their actually asking questions isn’t documented. Alex, however, learned “carrot” by asking us what we were eating, learned “orange” by asking about the color of the carrot, learned “grey” by seeing himself in a mirror and asking “What color?” and the labels of several other items through repeatedly questioning his trainers. Unlike the apes, he thus understood that he could use his existent phrases as a tool to learn more labels. Sadly, neither Griffin nor Athena seem to have acquired this skill.

At that point, I lost my patience and figured that the audience would think he was just randomly spouting phrases. Not good. I told him something like “Enough! I’m going to go away” as I turned my back and began to walk out of the room. The producer tracked the sounds of my heels clicking…and then came a little parrot voice… “I’m sorry…orange!” I don’t know if Alex had intentionally wanted to express his dismay about being asked to identify an old, boring item yet one more time, but he couldn’t have done a better job of it.

Needless to say, I wish that Griffin and Athena were equally chatty, but they both demonstrate their intelligence in many other ways, and Griffin in particular has exhibited levels of cognitive processing that continue to surprise my colleagues and surpass some of what Alex had shown. And, of course, given that African grey parrots are open-ended vocal learners, I haven’t given up on either of them.