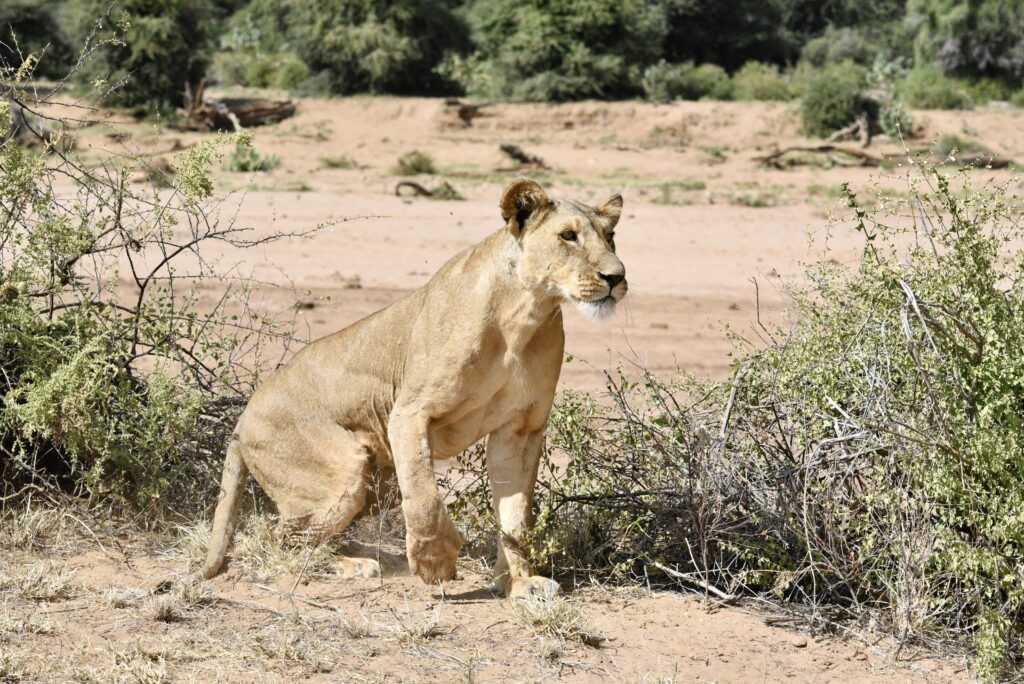 Every day, the midday sun sears the plains of northern Kenya, renowned for hosting some of Africa’s most iconic species. In times of healthy rain, it’s not uncommon to see lions gliding through the tall grass of Samburu National Reserve, elephants drinking from the Ewaso Ng’iro River, or herds of Grevy’s zebras grazing across the river in Buffalo Springs National Reserve. But a year of scant rainfall has left these abundant lands as dry as a bone, creating widespread scarcity of water and vegetation. This prolonged drought has led to cascading threats for all life in the region. But the people of Samburu have a long history of resilience in the face of hardship, and through the combined efforts of the Grevy’s Zebra Trust (GZT) and Ewaso Lions (EL), their communities have pulled together to make sure their landscapes, wildlife, and ways of life can withstand this latest crisis. 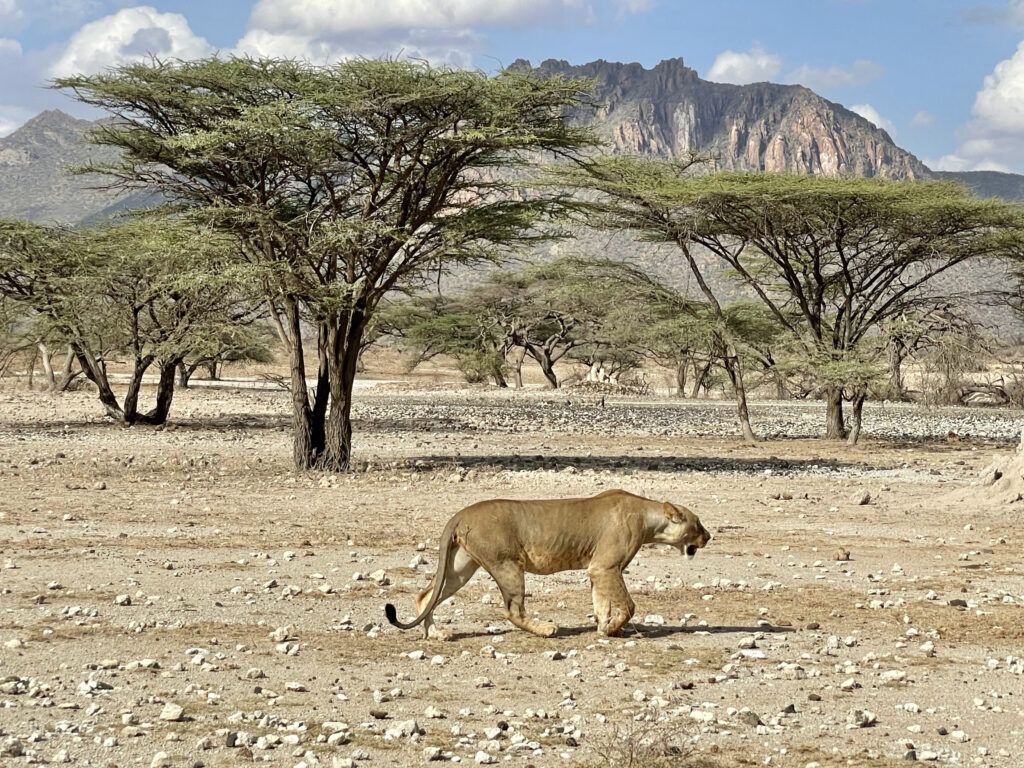 There are fewer than 2,500 lions left in Kenya. Samburu’s lions are unique, living mostly solitary lives rather than in prides. Drought puts severe pressure on these lions and heightens conflict between them and people.

This is not the first time below-average rainfall has left northern Kenya vulnerable. Severe drought in 2009 led to thousands of animals perishing, including Samburu’s entire buffalo population. In 2017, five lions were lost to conflict as wildlife and people were forced to converge on the few areas containing water. GZT and EL have worked together many times to address the persistent threats caused by water shortages. This year’s drought has reached similar severity, with livestock and wild herbivores competing for the last remaining grasslands. As grazing animals, Grevy’s zebras are particularly threatened by the lack of food caused by land degradation and encroachment from pastoralists. And by losing natural prey species to the drought, lions will often target weakened livestock. This leads to conflict with herders—a conflict that lions sometimes lose. 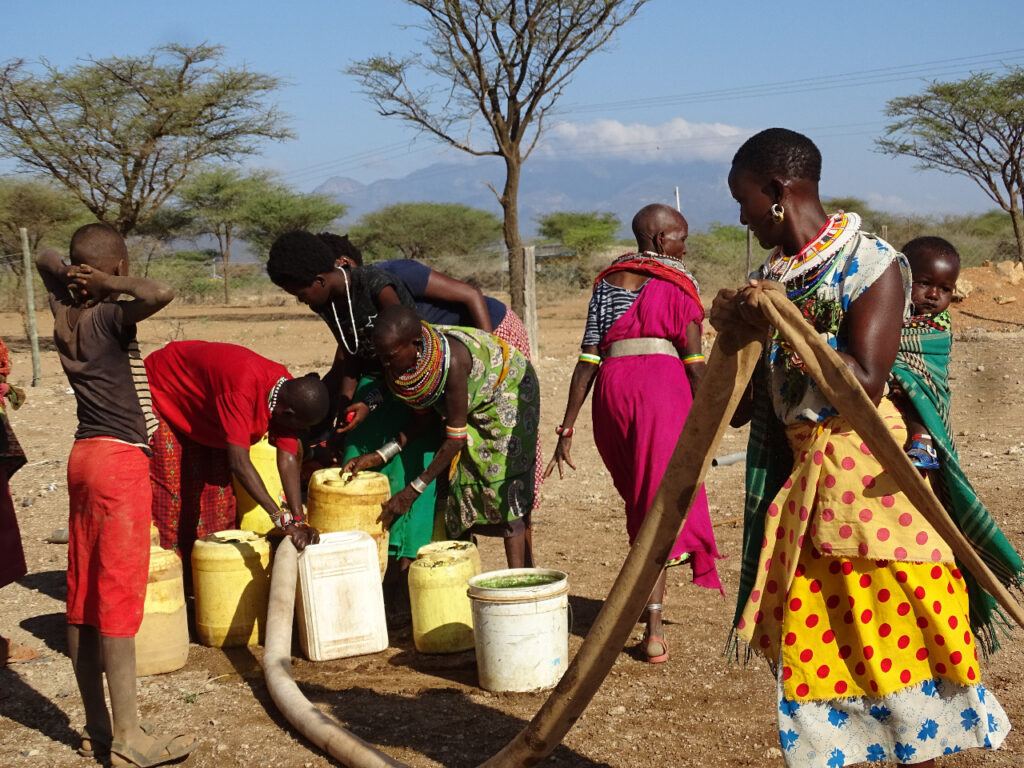 EL and GZT staff are part of the communities where they work. They provided water to these communities during the drought.

When climate models predicted another drought, GZT and EL wasted no time preparing. Together, both organizations provided Samburu villages with water for people and their livestock. By providing this care, GZT and EL reinforced their bond with these communities and the commitment that these communities have to protect wildlife. They also collaborated with reserve management and jointly stocked ranger stations with rations and fuel so they could continue patrolling protected areas. 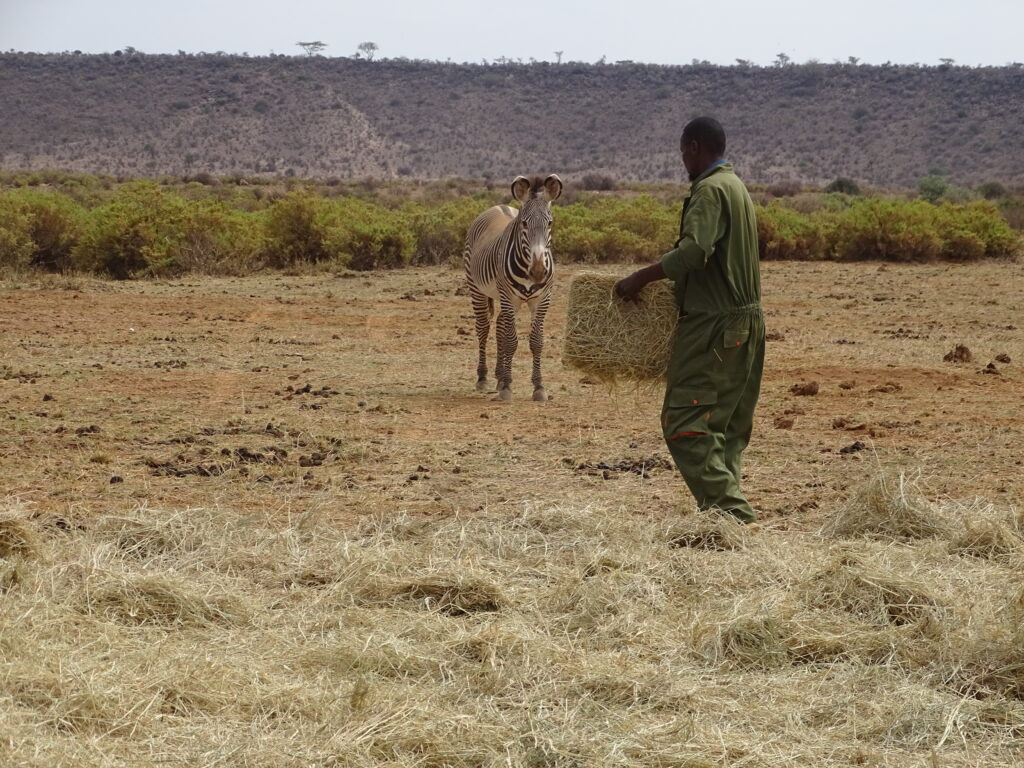 GZT deployed supplementary hay to help Grevy’s zebras get through the drought.

Similar to 2017, GZT deployed supplementary feeding interventions for Grevy’s zebras, placing hay in key locations so the herds had enough forage to survive. Community members also helped GZT monitor these feeding sites and water access areas. The women of Ewaso Lions’ Mama Simba program supported GZT’s efforts to restore degraded landscapes by reseeding new grass, which will sustain Grevy’s zebras and other prey species that lions depend upon. It will also help EL reduce human-lion conflict and reinforce tolerance for lions from herders under pressure, ensuring these landscapes remain an uncontested refuge for wildlife. 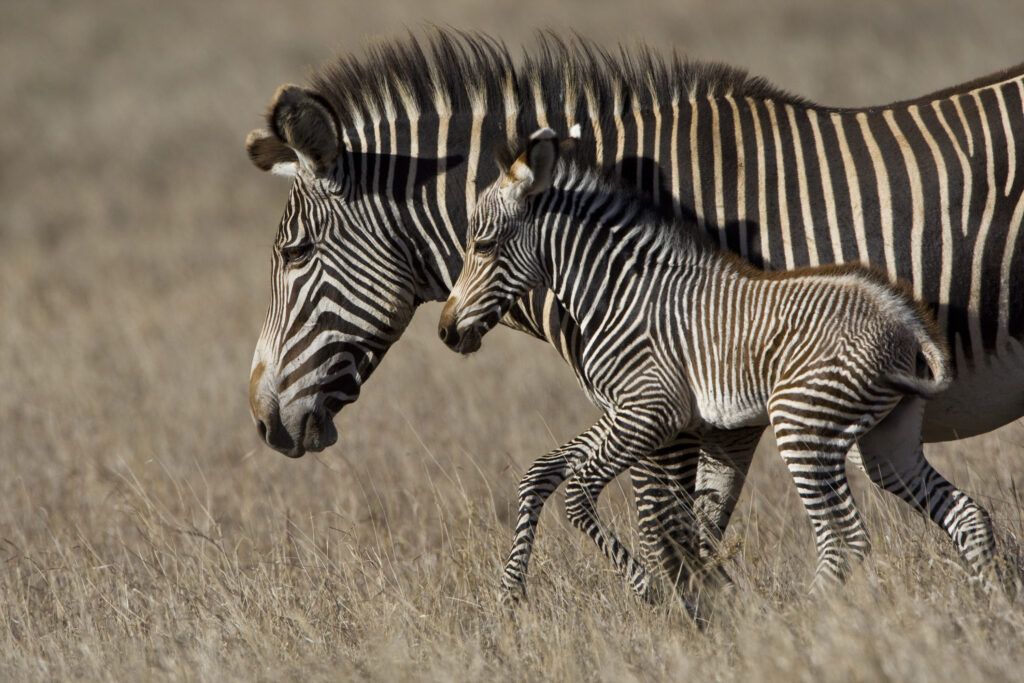 The Grevy’s zebra is one of Africa’s most endangered large mammals. Only 3,000 remain in the wild, and 90% of them reside in northern Kenya, making any significant loss of their numbers to drought caused by climate change devastating.

Scattered rains returned to Samburu late in the year, but the drought continues to bear down on the region. GZT and EL are maintaining their united response to this water shortage, proving to Samburu communities that they can weather this climate crisis together while continuing to protect the wildlife who also call this land home.

Little Kitten Preschool My Favorite Cat Pet Care – Early Learning Games For Kids Toddlers Children
Stray Kitten Greets Woman and Tags Along with Her Each Day Until His Wish Comes True
1 HOUR OF FUNNIEST CAT VIDEOS 2022 |Aww Pets
Get your Dog or Cat to Love you More Than Anyone Else
Adjustment is never a problem with this cute cat! (via Roman Melnichuk)