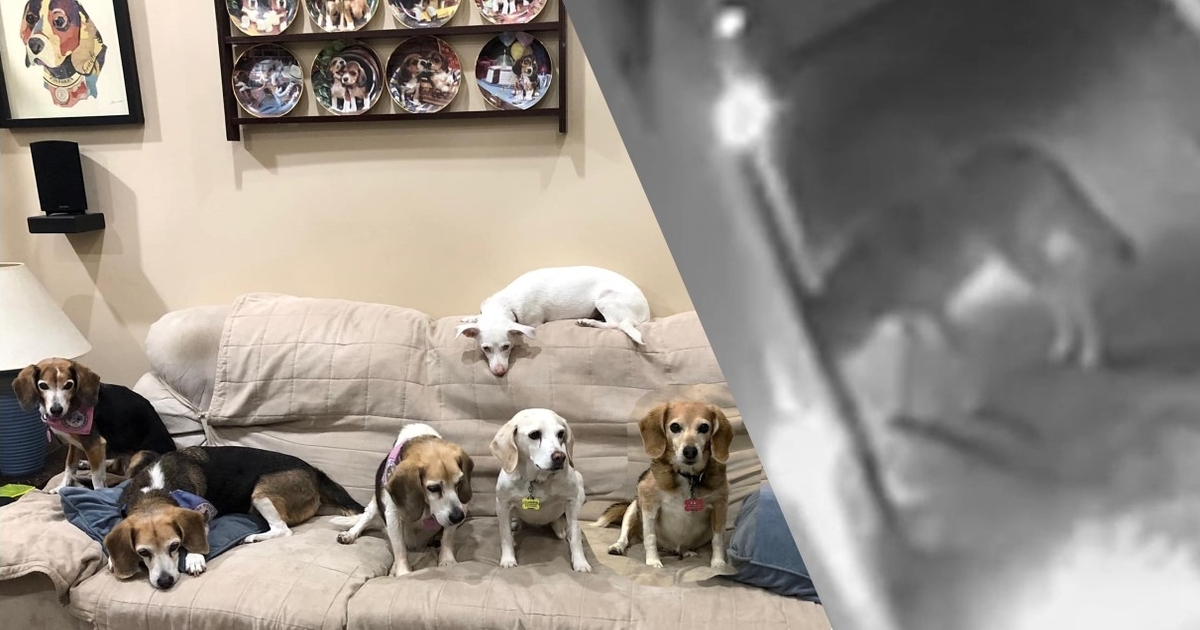 A woman in the Woodland Hills neighborhood of Los Angeles unknowingly played foster mom to one additional canine this week when a bold coyote scaled her 6-foot privacy fence and entered her home through the doggy door. Julie Levine runs a non-profit called Canine Rescue Connection, which specializes in rehoming Beagles.

The coyote was caught on Levine’s Ring cameras brazenly entering the home in the middle of the night while she and the dogs were sleeping.

“The dogs went crazy, and then I said this happened before with a rat, what else could be out there now?” Levine said.

Luckily, the coyote had already fled by the time the dogs woke up and caught its scent, so there was no physical confrontation. It wasn’t until Levine checked her cameras to see what the fuss was about that she realized what had happened.

“I think he probably went down the hall, saw what he was up against, and probably skedaddled out of there,” Levine said. “Then when the dogs realized they caught the scent, because they are beagles, they have incredible noses, and went nuts, and that’s why I decided to look at the security camera to see what all the hubbub was about, and turns out, it was a very large coyote.”

In total, the predator remained inside her home for about three minutes. This incident comes just days after a coyote attacked another family’s dog in the same neighborhood.

“The son found it when it happened and pulled the dog out of its mouth,” Levine said.

RELATED: After Small Dog Is Carried off by a Coyote, The Neighbor’s Rottweiler Springs Into Action

It is almost unheard of for coyotes to enter homes, but they are known to injure and even kill small pets found outdoors. While they rarely attack humans, their habitat and food sources continue to diminish, making predators like coyotes and mountain lions ever more desperate. A coyote attacked a child at Huntington Beach Pier in April, leaving her with facial injuries.

“They’re definitely very brazen, I mean to go inside the house like they belong there … We know they can scale fences, but we just didn’t think that they would go through the dog door itself and be in the house,” Levine said.

Levine has since boarded up her doggy door. She hopes this incident serves as a warning to other Los Angeles pet parents.

🔴LIVE Social Distancing with Clint: It’s My Birthday! (Week 44)
Funny Parrot That Will Definitely Make Your Day 😍 Funny Birds – Catz hub #shorts
Hairless Cat Brothers Love To Wrestle And Growl At Each Other | The Dodo Cat Crazy
Brothers Separated After Rescue Get A Familiar Whiff At Park
This Weary Rottweiler Is Getting The Care And Attention She Badly Needs