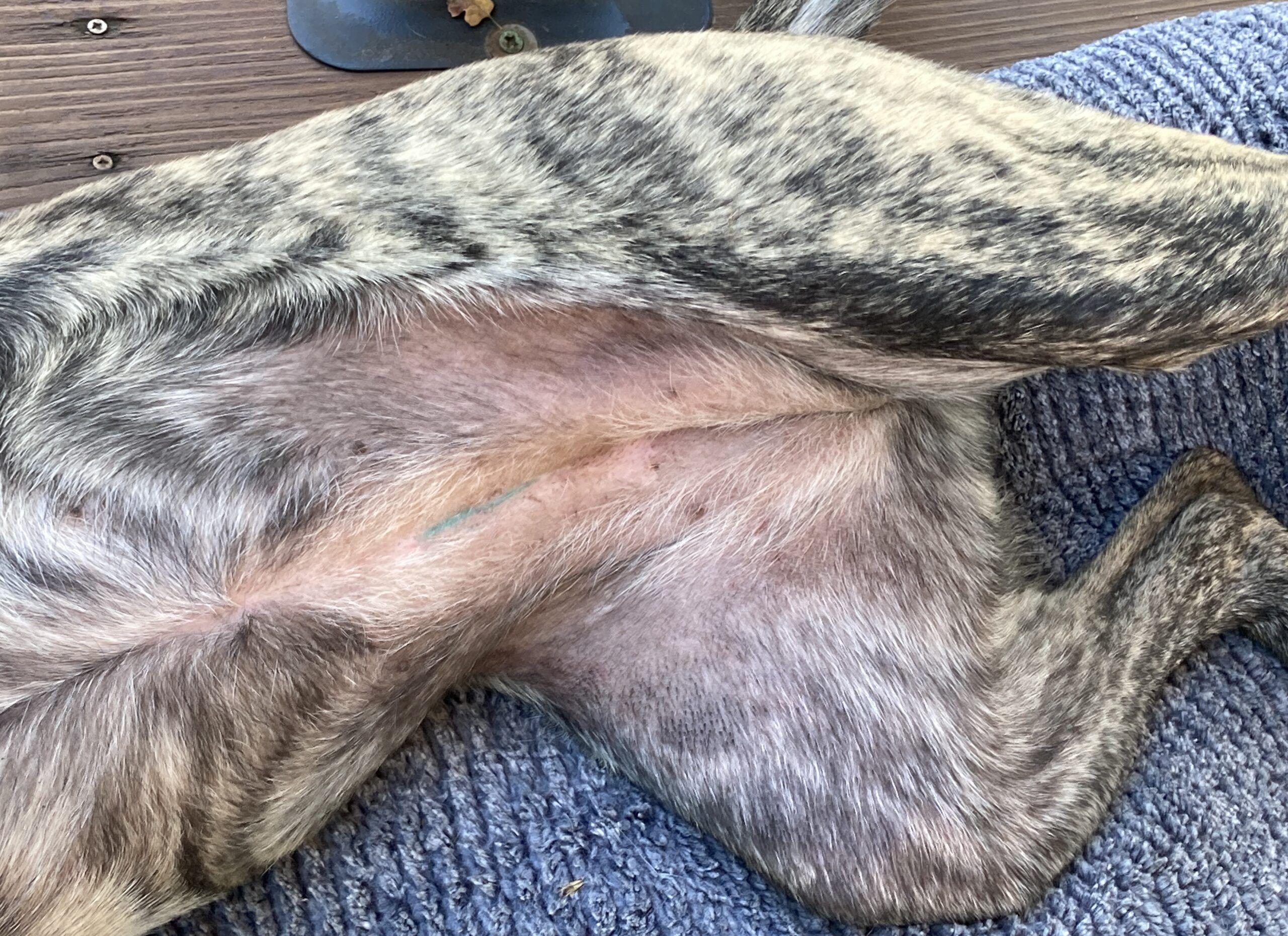 Dogs who have been spayed or neutered may have a simple tattoo on their tummy. Called a sterilization indicator tattoo, this short straight line of blue or green ink indicates that the dog has had surgery to remove their reproductive organs.

Why are spayed and neutered dogs tattooed?

When dogs end up in a shelter, their sterilization indicator tattoos remove all doubt about their reproductive status. Sometimes female dogs who have undergone spay surgery have a telltale surgical scar on their tummies, but in other cases the scar is impossible to detect and her reproductive status must be determined with exploratory surgery. If a dog was already spayed, says Meaghan Mielo, DVM, of Inverness, Florida, the exploratory surgery disrupts that day’s schedule of operations and is itself a complicated, lengthy, and unnecessary procedure.

You might think that it’s easy to tell if a male dog has had his testicles removed, but this isn’t always the case. While they are uncommon, there are prosthetic testicles – called Neuticles – that can be surgically implanted in place of a dog’s testicles during neuter surgery. Without a tattoo, even a veterinarian wouldn’t know that a dog with Neuticles had actually been neutered!

There are two other uncommon practices that render a male dog sterile while preserving the appearance of normal testicles. One is a vasectomy – in which the vas deferens is surgically cut so that sperm can no longer be ejaculated; this may be done if the owner wants the dog to retain his testicles and the hormones they manufacture, but be unable to impregnate a female dog. In another alternative sterilization procedure, called Zeutering, a solution of neutralized zinc gluconate (called Zeuterin) was injected directly into the dog’s testicles; this destroyed the ability of the testes to produce sperm, but only reduced and did not eliminate the dog’s ability to manufacture testosterone. (The company that made Zeuterin stopped selling it in 2016.) The male dogs who are subjected to either of these procedures are tattooed so that they can be identified as unable to reproduce and not subjected to unneccessary and redundant neuter surgery.

Finally, the scrotum of male dogs who have retained or undescended testicles (bilateral cryptorchidism) may appear to be empty, suggesting that they are neutered; in fact, their testicles may be located anywhere in their lower abdomen or inguinal canal (the passage through the abdominal wall through which a testicle normally descends). These dogs are generally infertile, but still manufacture testosterone and develop secondary sexual characteristics like the intact males they are.

In 2019, Dr. Mielo surveyed shelters, spay/neuter clinics, veterinary colleges, and private veterinary practices about their awareness and use of the tattoos. Her findings were published in the July 2022 issue of The Veterinary Journal. While only a few private clinics tattoo the dogs they spay or neuter, 80% of shelters and 72% of spay/neuter clinics tattoo the animals they sterilize. Green is the most common tattoo color and the most common placement is near or in the incision for male and female dogs. Dr. Mielo’s report recommends enhanced training for veterinarians to encourage the use of tattoos and protect animals from unnecessary procedures.

How is the tattoo applied?

In some cases, the tattoo ink is applied to a very small, shallow incision is made in the dog’s skin close to the site of their surgical incision. After the ink application, the skin is gently stretched and a tiny amount of glue is applied on the tattoo to prevent the ink from spreading. A video at the ASPCA website demonstrates that style of tattoo application. Other clinics prefer to apply the tattoo ink directly to a short section of the dog’s spay or neuter incision itself.