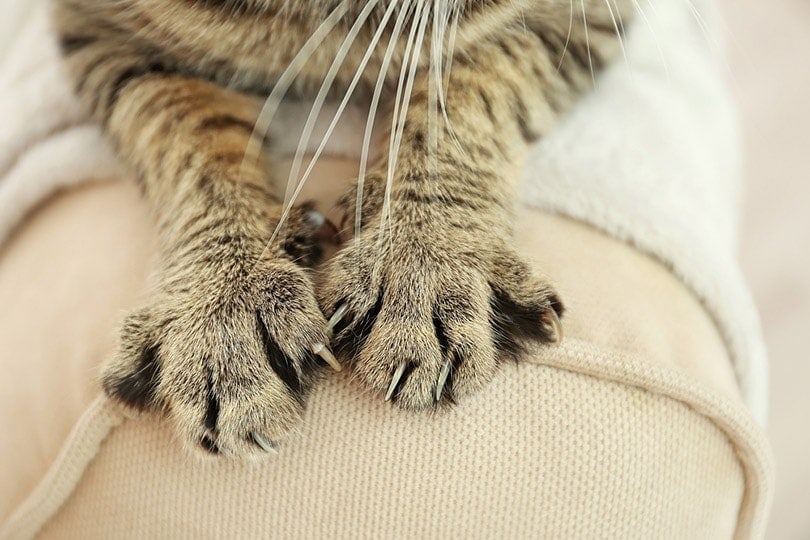 Cats are finicky creatures who have no problem letting you know what they like and don’t like. Cats have preferences for food, toys, where they sleep, and even where they use the litter box, but do their preferences extend to having a favorite paw? Do they have a dominant paw, like people have a dominant hand? The science says yes, but it’s not easy to tell which paw your cat prefers. Whether you know it or not, it’s likely that your cat is either right or left-pawed.

Do Cats Have a Dominant Paw?

While most studies regarding lateralized motor behavior (the dominance of one side over the other) have been conducted in humans, science is showing that this asymmetry extends to almost all vertebrate species. A study published in 2019 in the journal Animals showed that 44.6% of domestic cats in the study were left-pawed, 35.7% were right-pawed, and 19.6% were ambilateral (they used both sides equally).

Unlike humans, who show a higher incidence of right-handedness, cats don’t have a more common side bias overall. The Journal of Animal Behavior showed that 73% of cats have a preferred paw when reaching for food, and 66% had a preference for which paw stepped into the litter box first. However, only 25% of cats have a preference for the side they lay on. The side they choose has no correlation to which paw they prefer in other activities.

Paw Preference is Linked to Gender

Interestingly, male cats tend to prefer their left side, while females prefer their right. While it doesn’t really matter which side your cat prefers, it does have implications for how your cat reacts to stressors and processes information.

Left-limbed animals rely heavily on the right side of their brain. This means they will show stronger fear responses, more aggressive behavior, and have more difficulty coping with stressful situations. On the other hand, right-pawed cats will rely more on the left side of the brain. It is more responsible for the logical processing of information and positive emotions.

How to Tell if Your Cat is Right or Left-Pawed

It’s not easy to tell whether your cat prefers their right or left paw, but you can figure it out with some detailed observation. If you watch your cat closely for a few weeks, you will notice which paw they place forward first. They’ll step up the stairs with that paw, step into the litter box with one side first, and they’ll reach for toys or food with their preferred paw. In most cases, you will notice a preference for one side over the other.

It’s clear that cats do have a preferred or dominant paw. The side they prefer is linked to their gender, with male cats being primarily left-pawed and the females being right-pawed. This could also connect to how your cat behaves and processes their emotions. To determine which paw your cat prefers, observe their behavior over a period of time. You may be able to discern which side is their dominant side.

Cat mom to Ivy – a feisty little rescue kitten that is her one and only child. For now! Throughout her life, she has been introduced to the special love that can be found in the bond with a cat. Having owned multiple felines, she is more than certain that their love is unmatched, unconditional and unlike any other. With a passion to educate the public about everything, there is to know about felines, their behavior, and their unique personalities, Crystal is devoted to making sure that all cats and their owners know the importance of conscious living – and loving!